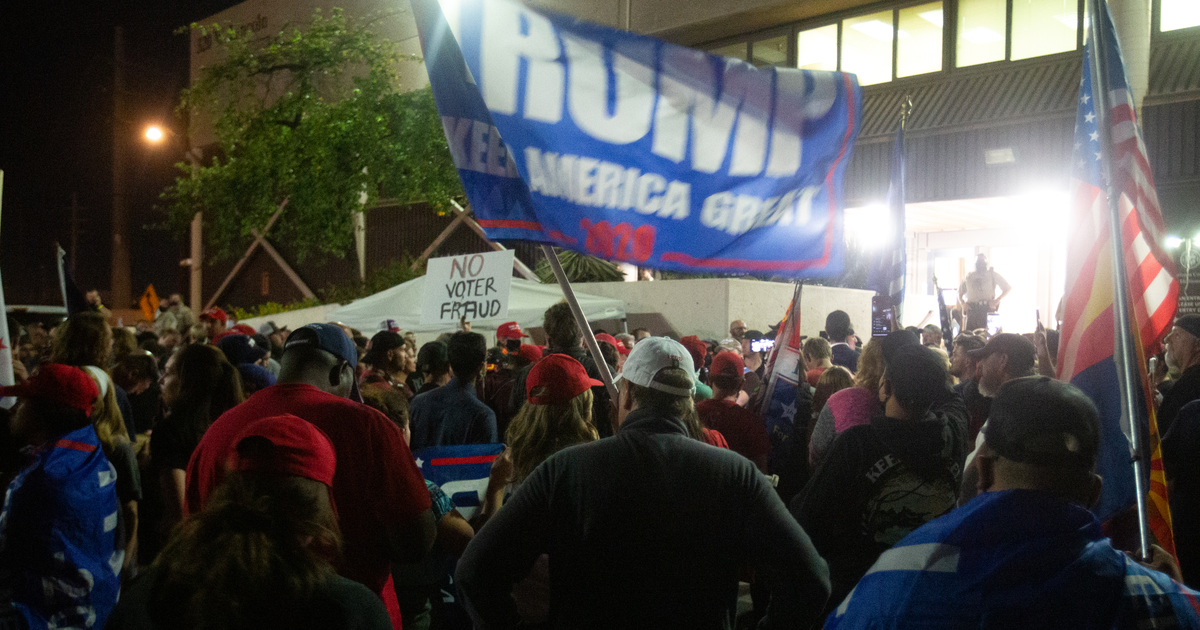 Donald Trump’s supporters are spreading a conspiracy theory involving Sharpies in an attempt to stop votes for Joe Biden from being counted.

As the Democratic candidate seems poised to overtake President Trump’s lead in several states, Trump and his supporters have demanded that votes stop being counted across the country.

Well, everywhere except Arizona, where Trump supporters are calling for the exact opposite.

They’re pushing the #SharpieGate conspiracy theory. Unlike #PizzaGate, it doesn’t involve a satanic pedophile ring hidden in a pizza shop’s basement. Instead, the false claim is that only Trump supporters were handed Sharpies at polls because they bleed through ballots, which causes voting machines to invalidate them.

None of this is true. There is no #SharpieGate. It’s misinformation.

In Arizona, which turned blue last night, conservatives are cooking up a conspiracy theory that is already being called #SharpieGate.

The gist is they believe poll workers gave Trump supporters Sharpie markers to fill out ballots, which then somehow invalidated their votes. pic.twitter.com/qO0ppAZCDT

Meanwhile on YouTube, Steven Crowder got 3.5 million views on a 5-hour livestream in which he promoted Sharpiegate and a bunch of other debunked voter fraud claims. pic.twitter.com/i2la84lZh5

Here’s the truth. All of the votes in Arizona are being counted. Arizona election officials put out several statements debunking the conspiracy theory, noting that felt-tip pens or markers will not invalidate a vote.

IMPORTANT: If you voted a regular ballot in-person, your ballot will be counted, no matter what kind of pen you used (even a Sharpie)! 1/

Did you know we use Sharpies in the Vote Centers so the ink doesn’t smudge as ballots are counted onsite? New offset columns on the ballots means bleed through won’t impact your vote! Find a location before the polls close at 7 p.m. today at https://t.co/8YEmXbWyRL. pic.twitter.com/KKG2O8rQhf

Regardless of this fact, a large crowd of Trump supporters protested outside the Maricopa County Elections Department on Wednesday night as poll workers counted votes.

They’re shouting about the sharpie social media misinformation. You can see law enforcement preventing them from entering the building. They’re waving Trump flags and this crowd is growing pic.twitter.com/Vr55ZpKqTv

The situation became so dire that the vote count had to be delayed. Authorities escorted poll workers and watchers inside the building, and watching media away from the facility, for safety reasons.

And, of course, Facebook Groups are playing a major role in spreading #SharpieGate misinformation.

A conservative Facebook Group called “Stop the Steal” gained hundreds of thousands of members in just two days. Members demanded vote counts be stopped in several states — except Arizona, where they said they wanted their Sharpie-marked votes counted. Facebook eventually shut the group down.

Facebook statement: “In line with the exceptional measures that we are taking during this period of heightened tension, we have removed the Group ‘Stop the Steal,’ which was creating real-world events… How to Start an Auto Transporting Business How to Manage Family Finances