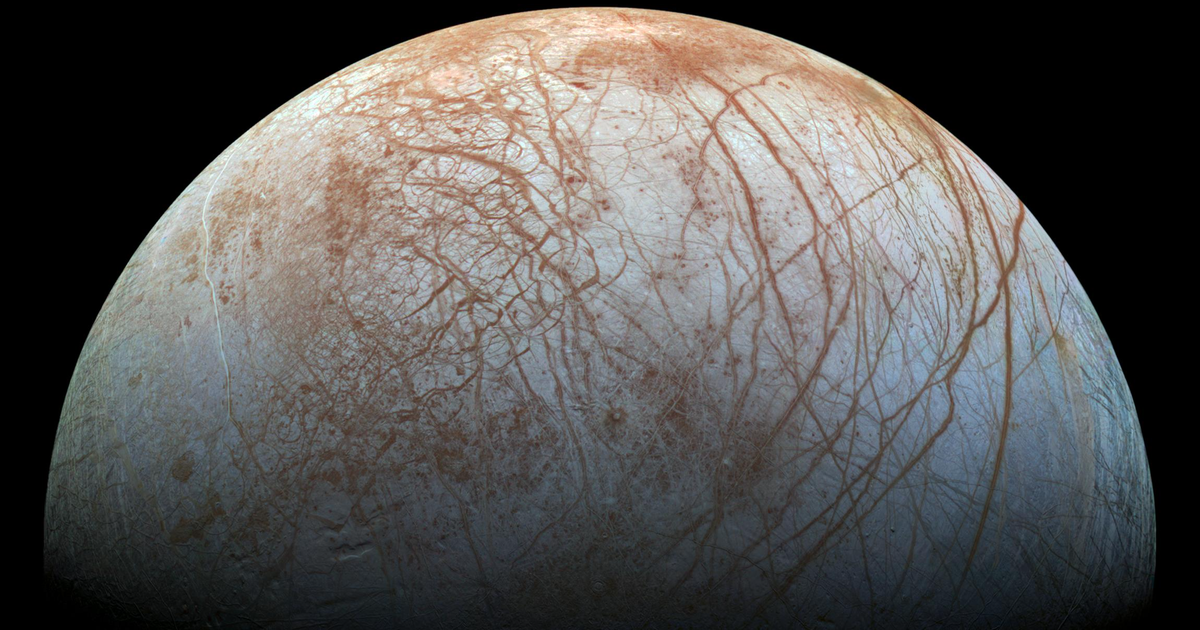 By replicating conditions that may be present on the surface of Europa, one of Jupiter’s dozens of moons, scientists found that this icy orb might glow.

Scientists at NASA’s Jet Propulsion Laboratory (JPL) created glowing pieces of ice by freezing water and various water/salt solutions that are most likely to be present on Europa down to 100 Kelvin (-279.67 degrees Fahrenheit) and hitting them with radiation just like Europa experiences. The results published in Nature Astronomy Monday suggest Europa could glow.

The light and intensity of Europa’s glow is determined by its composition. By conducting these experiments, future missions to observe Europa like Europa Clipper will be able to compare close-up findings with data collected in Monday’s study to see what exactly Europa is made of, whether that’s water with sodium chloride (table salt), magnesium sulfate (Epson salt), sodium carbonate, or other solutions.

“There have historically been debates about the identities of some of these salts on the surface of Europa,” said Bryana Henderson, JPL scientist and co-author on the study. “Now that we know about this glow phenomenon, we could potentially use it as a tool in the future to nail down some of these salt compositions.”

Learning the composition of Europa will help us understand a lot more about this moon, including what its subsurface ocean is made of and whether that ocean could harbor life. Beneath an outer crust of about 16 miles of ice, it’s thought that Europa has a huge ocean containing four times as much water as Earth’s oceans combined.

“Understanding its chemistry, the composition of the ocean, is an important piece of the puzzle to understanding whether Europa could be a habitable environment,” Bob Pappalardo, Europa mission project scientist at JPL, said. “We don’t know a lot about Europa now, and with the Europa Clipper mission that will be going, we want to much better understand the big picture of what makes Europa work.”

Set to launch in the mid-2020s, Europa Clipper will bring along nine instruments to observe the moon, including cameras and spectrometers. Putting different pieces of the Europa puzzle together through Clipper will help us discover how Europa works as a whole, from its molten core to its frozen face.

“We know from prior observations of Europa that there are several interesting features on the surface, and that these could have different compositions,” Henderson said. “Searching for different glows across different surface features would be fascinating.”

Europa’s potential glow would be most visible from its trailing hemisphere — the part facing away from Jupiter  — and only when it isn’t lit by the sun, she explained. All parts of Europa are irradiated to some degree thanks to Jupiter’s strong magnetic field and a steady supply of sulfur dioxide from the volcanic moon Io, but it’s only really visible in the dark.

Getting these glows to occur on Earth wasn’t exactly easy considering the experiment involves a lot of radiation.

“These experiments are tough to do in the lab, and the high radiation environment is very hard on our instrumentation and we had to take several precautions to make sure we could conduct the experiment safely and without frying the detectors too much,” Henderson said.

Putting all of this together has larger implications beyond understanding Europa and its possible ocean.

“There are several moons in the outer solar system that are believed to have liquid water oceans beneath their surfaces,” Pappalardo said, noting Saturn’s Enceladus and Titan, Jupiter’s Ganymede and Callisto, Neptune’s Triton, and Pluto itself. “Ice-covered moons that contain oceans within might be the most common habitable environment that exists out there beyond our solar system, so we want to understand this whole class of worlds and what they’re like and how they work.”

Of course, there’s no concrete evidence of any life outside of Earth, but the idea that a planet or moon could possibly be suitable for life is always intriguing.

The new Kindle Paperwhite made me enjoy reading books again

This floating rock is actually a perfectly camouflaged boat