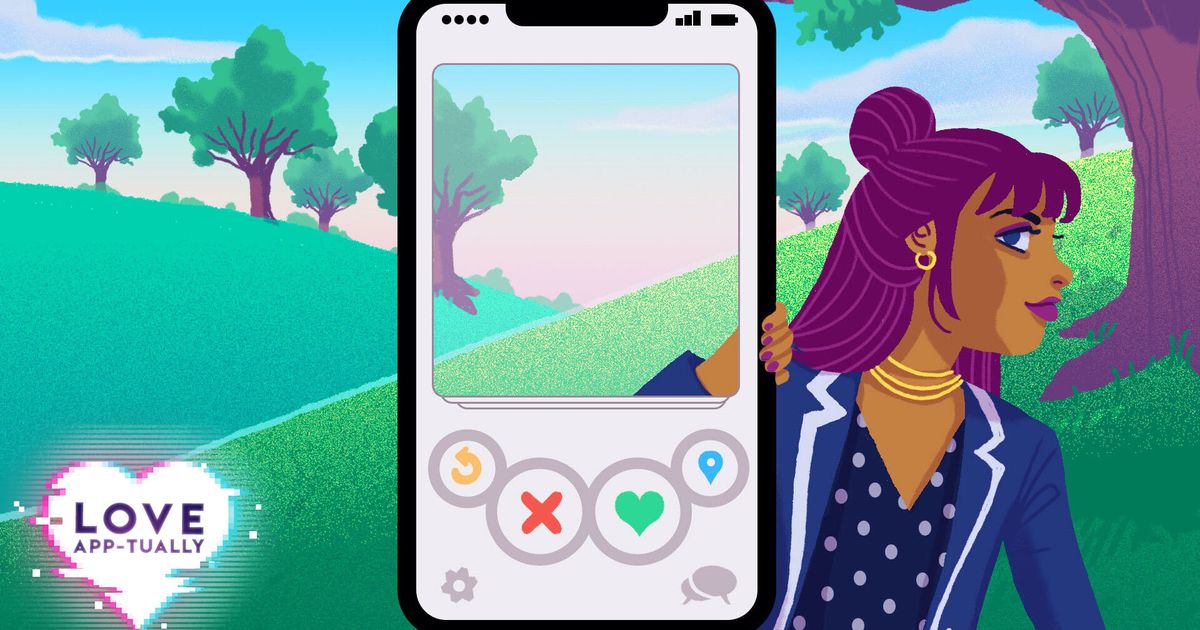 In our Love App-tually series, Mashable shines a light into the foggy world of online dating.

It feels like the entire world is online dating.

Was that dramatic? You try being a single millennial and see how it feels! Being on apps is a foregone conclusion of modern love, and those who don’t participate risk getting left behind. Some of us have never joined in this movement, and don’t intend to.

Proma Khosla, Entertainment Reporter/Fictional Couples Therapist: OK, in the interest of full disclosure, I was on apps for a hot sec in 2015. My friends were shocked because I have never shown any real interest in dating, and after a grand total of two (2) meetups, I deleted them and never looked back.

Nicole Gallucci, Culture Reporter/Senior Crush Correspondent: In my 27 years of life I have genuinely *never* downloaded a dating app or tried online dating myself, but I have swiped for friends on occasion just to see what all the fuss was about. (I was clearly not impressed.)

Though we draw on different experiences, the two of us have one glaring thing in common: We’ve never had a long-term relationship. We might be certified authorities on crushes and situationships (including separate devastating experiences involving Captain America t-shirts), but never has that translated to a capital-b Boyfriend. It’s harder to date casually when people our age are looking for something more serious, and it’s hard to date seriously when you’ve literally never done it before.

It’s not that we don’t know what we’re looking for — if anything, we may know a little too well. Talking, flirting, and dating require a lot of effort that almost always ends in disappointment. Why waste our time, our matches’ time, and valuable storage on our phones with such intimidating odds? While not using apps DOES make it significantly harder to meet people today, there are some genuinely valid arguments against online dating.

Proma: Here’s the thing: Rom-coms have made people sick — us included.

Nicole: Oh, absolutely. My brain is filled with unrealistic relationship expectations from watching The Holiday approximately 425 times in the past 15 years.

Proma: I want the butterflies and intrigue and tension. I do not want someone to spew cheesy dialogue at me out-of-context.

Nicole: Hard same. I’ve always wanted the meet-cute aspect of rom-coms, and I feel like you can’t get that through dating apps. I want to meet someone organically — without any help from technology — through a mutual friend, or while waiting in line at a coffee shop, browsing a bookstore, or sprinting through Grand Central during a hurried commute. I refuse to believe that’s too much to ask.

Proma: There’s such a disadvantage to communicating only through text. And cute, flirty gestures are always f*cking magical when you like someone, and super cringey when you don’t. I realize it’s unfair but it is also undeniably true. So when some stranger on an app is trying to be charming and romantic, I hate it!

Nicole: Oh yeah, the thought of receiving a cheesy pick-up line from a rando is incredibly stressful to me. But I’m not sure I’d like a bland, lackluster, generic intro either? Communication on dating apps all feels so calculated.

Proma: This is very much a ME problem, but I get so annoyed when people force perfectly normal things like trying to talk or hang or get to know me — and that’s the ENTIRE POINT OF APPS. Catch me rolling my eyes at some poor man’s “Hello” and dismissing him before we can get any further. This only underscores the need for me specifically to stay off the apps, for everyone else’s sake.

Nicole: I also hate the fact that everyone messaging you on apps is almost certainly messaging a bunch of other people, too. If I wanted to date someone who was simultaneously flirting with 25 other women I’d apply to be on The Bachelorette.

Most human beings crave companionship, especially romantic and physical (us watching a Chris Evans movie), and apps help satisfy that need. But they add layers of formality and pressure by their very nature. Every polite pleasantry carries the subtext that you might want to hook up with or literally marry this person. We happen to be two individuals who hate superfluous social interaction with strangers and will simply crumble to dust if we fall short of expectations in a relationship, so dating apps might not be the move!

The pandemic has made single people who don’t use dating apps feel slightly more hopeless, though. It’s not like we were out at bars and clubs every night, clamoring to meet someone. (Did anyone really do this outside of TV? Don’t answer that.) But the sheer act of navigating the world on a daily basis meant that we were coming into contact with other people. There were infinite chances for meet-cutes, random hotties on the street, friends of friends to illicitly flirt with, but all of that is now a thing of the past.

Maybe we’ll emerge from our quarantine cocoons later this year (or next) with clear eyes and full hearts. Maybe we’ll decide to hop on the app bandwagon, or we’ll simply keep waiting and dreaming like a character in a period drama (except  Bridgerton, which is nothing if not speed dating). As always, we support our friends who choose to use online dating, as well as those like us who just aren’t feeling it.

Listen, if nothing else, it’s more matches for the rest of you.