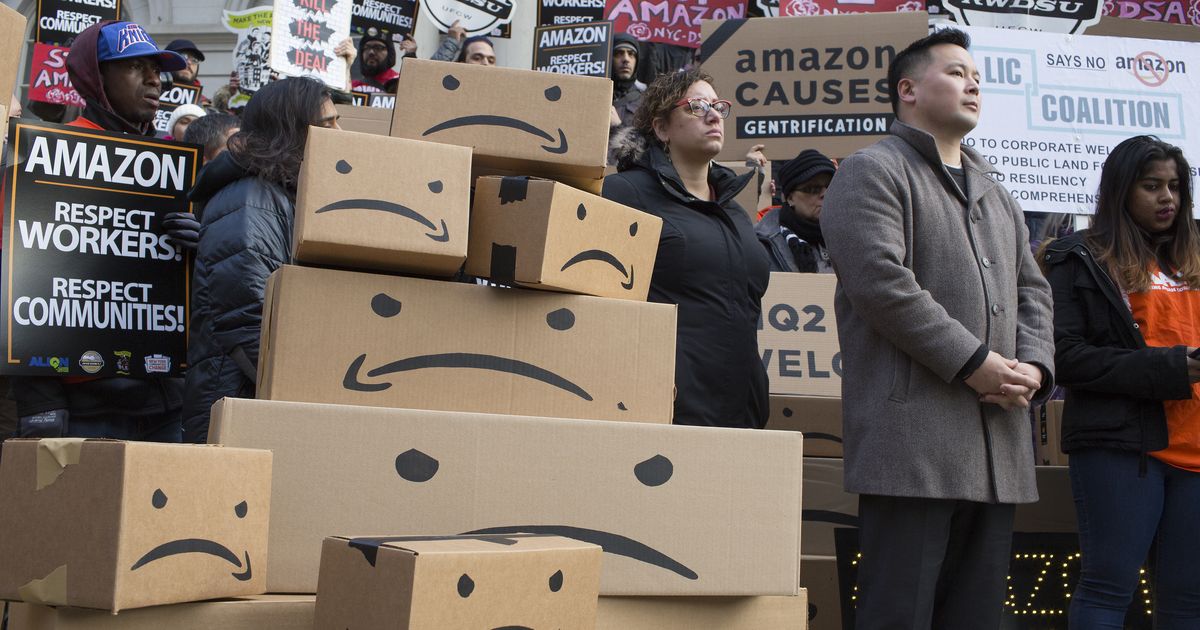 From failed attempts at sassy clapbacks to high-tech trolling, it’s been a weird week for Amazon on Twitter.

Amazon got in some social media trouble recently as its PR twitter account tried to refute claims of its harsh treatment of workers and shift blame for taking advantage of tax loopholes. Many on Twitter weren’t having it, but there were also actual non-people who joined the fray, i.e., pretty obviously troll accounts.

You might have seen some of them around. Outwardly, at least, they’re Amazon employee “ambassadors” talking about how great working for Amazon is, particularly in warehouse or delivery jobs. Except when they’re not — sometimes they’re fake accounts.

As an employee in Amazon, I have actually been treated very well despite there being no unions. I can’t imagine having to pay monthly for a union by the way, especially with the great treatment here and them not pushing employees too much, plus lots of growth opportunities!

Other than breathlessly praising a company with a well-documented history of worker abuses, there was something just not right about some of the newest accounts. Internet sleuths, reporters, and ultimately the people behind the fake accounts themselves revealed in March that the most outrageous accounts were created by people trolling Amazon. The above tweet from “Frants” might seem like a half-assed PR attempt, but it’s actually a fake account satirizing just how transparent Amazon’s actual PR efforts are. Fake workers robotically heaping praise upon a mega-corporation is, in a sense, effective trolling because Amazon actually does pay some of its employees to do just that.

There’s another reason the way Amazon treats its workers, and its blundering attempts to make people question or forget reports of its behavior, have all come to a head this week. Votes are currently being counted on whether workers at a huge Amazon facility are going to unionize. That appears to have made Amazon try extra hard to juice its reputation as a good workplace by *sassily* disputing the reports that some employees urinate in bottles because they don’t get adequate bathroom breaks. Through both social media trolling and receipts, people aren’t letting Amazon’s corporate messaging go un-interrogated.

Here’s everything you need to know about the weird Amazon “ambassador” accounts, and why it’s all happening now.

Yep, some of the accounts are fake

“Darla” is ostensibly a mom, movie lover, and Amazon fulfillment center worker. Except in reality she’s none of those things. There is no Darla.

Along with “Frants,” “Lulu,” “Jadeyn,” and others, “Darla’s” now-suspended twitter account @AmazonFCDarla tweeted in praise of the Amazon worker experience and against unionization. But on Tuesday, Amazon confirmed to outlets including Gizmodo that Darla is neither a real Amazon employee, nor is the account affiliated with the company.

“I thought maybe I could make an account and pretend to be an absolute sycophant for Amazon, for a little fun over the weekend,” Appleton told the Daily Dot.

Beyond open Amazon adulation, Darla and her ilk have some high-tech tells. Their avatars appear to be the creation of GANs, or “generative adversarial networks,” which is AI that creates fake images of people by fusing together photos found in large databases. As Mashable writer Jack Morse points out, there are clues that a GAN is a GAN, such as uneven details in the image.

So Darla is fake. But some Amazon “ambassador” accounts aren’t.

In 2018, reports showed that Amazon was paying some employees to praise and defend the company online. It calls these people Amazon fulfillment center ambassadors, and their twitter handles follow the same formula: @AmazonFC[name]. That’s what made it so easy to create spoof accounts.

Internal Amazon documents recently published by The Intercept revealed the purpose of these accounts:

“To address speculation and false assertions in social media and online forums about the quality of the FC [Fulfillment Center] associate experience, we are creating a new social team staffed with active, tenured FC employees, who will be empowered to respond in a polite — but blunt — way to every untruth.”

Is it just us or is the word “untruth” particularly dystopian? Anyway, some of those allegations Amazon would like everyone to think are “untruths” may refer to reports that during 12-hour shifts, workers’ 15-minute breaks are barely enough time to make it to the break room and back, that Amazon facilities have a disproportionately high injury rates, and yes, that workers urinate in bottles in lieu of having time to take bathroom breaks or access to bathrooms at all.

Another fun detail from the documents? The employees were picked in particular for their “sense of humor.”

Amazon’s reportedly grueling treatment of its fulfillment center workers has been in the news for a while. It’s under extra scrutiny now because there is a historic vote underway in Alabama. At a Birmingham warehouse, 6,000 eligible Amazon employees have voted on whether to unionize. Votes are currently being counted, and the results are expected early next week.

Amazon really, really doesn’t want this to happen for the obvious reason that it could spark unionization at other facilities, meaning it could have to increase pay and treat employees more humanely across the board— which could affect its bottom line. In past failed union drives at other facilities, it has reportedly employed union-busting tactics, including surveillance and intimidation. In Alabama, documents obtained through a FOIA request by Bloomberg reporter Joe Eidelson show it even tried to install cameras in the warehouse where the union vote was taking place (the National Labor Relations Board blocked this attempt).

That’s all put Amazon’s public relations efforts into overdrive. It’s trying to sway public opinion to the idea that Amazon is a great place to work by emphasizing the living wage it pays workers (and denying the pee bottle thing) on social media. Amazon does pay its workers $15 per hour, which is well above the federal minimum wage of $7.25. However, in 2018, some employeesreported that the pay increase also came with decreases in some benefits. Moreover, Amazon is infamous for the efficiency demands its workers say it places on them and reports say has resulted in injury and general degradation.

Jeff Bezos, for his part, is not having any of it. Recode reported that the founder and CEO himself told Amazon flacks to engage on Twitter with criticism from pro-worker policy makers like Elizabeth Warren. That didn’t work out so well, and led to beautiful exchanges like this one.

I didn’t write the loopholes you exploit, @amazon – your armies of lawyers and lobbyists did. But you bet I’ll fight to make you pay your fair share. And fight your union-busting. And fight to break up Big Tech so you’re not powerful enough to heckle senators with snotty tweets. https://t.co/3vCAI93MST

Darla may be fake, but Amazon’s estimated 1.2 million full- and part-time fulfillment center workers are very real. Amazon’s future is now in their hands, and their votes, despite what happens on Twitter.

Kickstart your career with lifetime access to thousands of professional courses