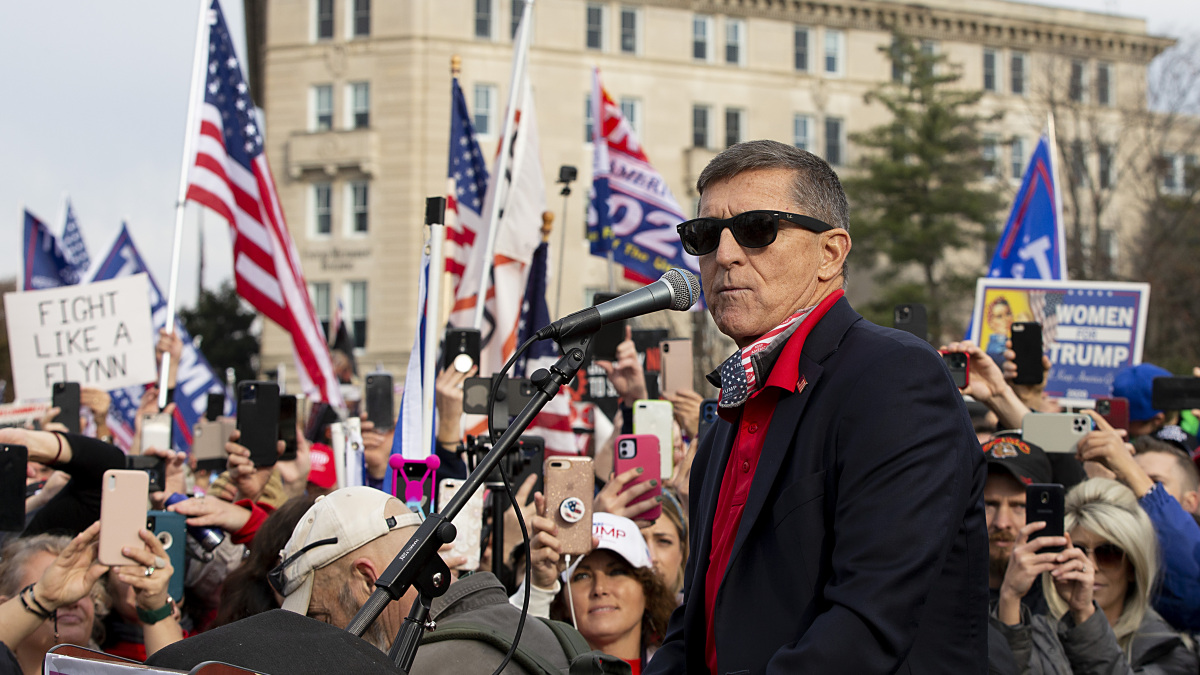 Edward Snowden is calling it the “story of the year.”

On Sunday, the first in a series of investigations were published involving NSO Group, an Israeli firm. The report focused on how the firm’s spyware software, Pegasus, has been used by governments to target world leaders, political dissidents, activists, and journalists around the world.

As new stories about the spyware continue to drop, believers of the vast right-wing conspiracy theory QAnon had their own revelation to deal with:

Michael Flynn has ties to the firm behind the spyware.

Back in 2017, Huffington Post reported that Flynn had previously worked as an advisory board member and “consultant” for OSY Technologies, NSO Group’s parent company, as well as its previous owner, private equity firm Francisco Partners. According to the Washington Post, Flynn was paid “roughly $100,000” for his work as a consultant for the companies between 2015 and 2017.

Interestingly, the news of Flynn’s involvement with an Israel-based cyberweapons firm in the middle of a huge spying scandal was brought to QAnon’s attention by Ron Watkins.

Ron Watkins is the former administrator of 8kun, the extremist imageboard owned by his father, Jim Watkins. Ron is also whom many believe may very well have been the person behind Q, the anonymous individual at the heart of the QAnon conspiracy theory. Since 2017, QAnon followers have based the vast majority of its foundational beliefs on “drops” left on imageboards like 4chan and 8kun by the anonymous user Q.

In a post on the far-right social network, Gab, Watkins points out Flynn’s ties to NSO Group and notes how this could be used to hurt the election audits, which Trump supporters believe will prove the 2020 Presidential election was stolen. (Note: The election was not stolen. President Joe Biden legitimately won the 2020 election and is the president of the United States.)

On his channel at the messaging service Telegram, Watkins continued to speculate about Flynn amongst his more than 300,000 subscribers on the platform.

Hours later, Watkins returned to his Telegram channel to further speculate about Flynn’s involvement. This time, Watkins urges Flynn to put out a statement in order to set the record straight.

Related Video: How to recognize and avoid fake news

“Gen Flynn should consider putting out a statement about his involvement in the companies close to Pegasus,” posted Watkins. “I’m curious as to the extent of what he knew regarding Pegasus and the targets of the software.”

Many QAnon followers still don’t exactly know what to make of the news. Some seemed to accept the idea that this “doesn’t look good” for Flynn.

Altogether, Watkins’ posts on Telegram and Gab about Flynn and Pegasus generated thousands of comments.

“So is General Flynn a bad guy then?” asked one of Watkins’ Telegram subscribers.

Others jumped to Flynn’s defense, questioning Watkins’ motives, and claiming Flynn had to have been a “white hat infiltrating the black hats” while working with companies tied to the spyware firm.

“I trust Flynn no matter what!” exclaimed one of Watkins’ subscribers.

“Fuck off…you mess with Flynn and you mess with America’s Hero. WWG1WGA,” replied a Flynn supporter while invoking the “Where We Go One We Go All” QAnon slogan.

It’s unclear exactly why Ron Watkins would share such speculation about Michael Flynn, a Trump-supporting former Army lieutenant general who also served as a national security advisor for the administration. Flynn is viewed as a hero to many in the QAnon world and, in their eyes, his legitimacy in the movement is buoyed by the fact that Trump pardoned Flynn after he plead guilty to lying to the FBI during the Russia probe.

It should be noted that since Q stopped posting last December, infighting has grown amongst QAnon influencers as they fight to control the movement. While Watkins has denied being Q, he has kept himself active in the community, sharing Q-like drops on platforms such as Gab and Telegram.

Grab a VR headset on sale for 50% off this weekend

The gloriously chaotic humor of ‘Werewolves Within’ brings it to life