It’s not enough for Microsoft to release the first new version of Windows in six years. On top of that, the company’s got a slew of new Surface devices rolling out this fall, and its flagship Surface Laptop Studio is very close to being the ideal way to jump into Windows 11.

As sort of an heir to both the Surface Book and Surface Studio, the Surface Laptop Studio marries the former’s portable form factor with the latter’s unique hinge-based screen movement to create something that’s part laptop, part drawing pad, and part tablet.

Its beefy specs are met with a similarly beefy starting price of $1,599, which can balloon past $3,000 in the highest-end configurations. This is an extremely capable portable PC, but it could stand to be a little more capable for those who want a new Windows 11-ready laptop. 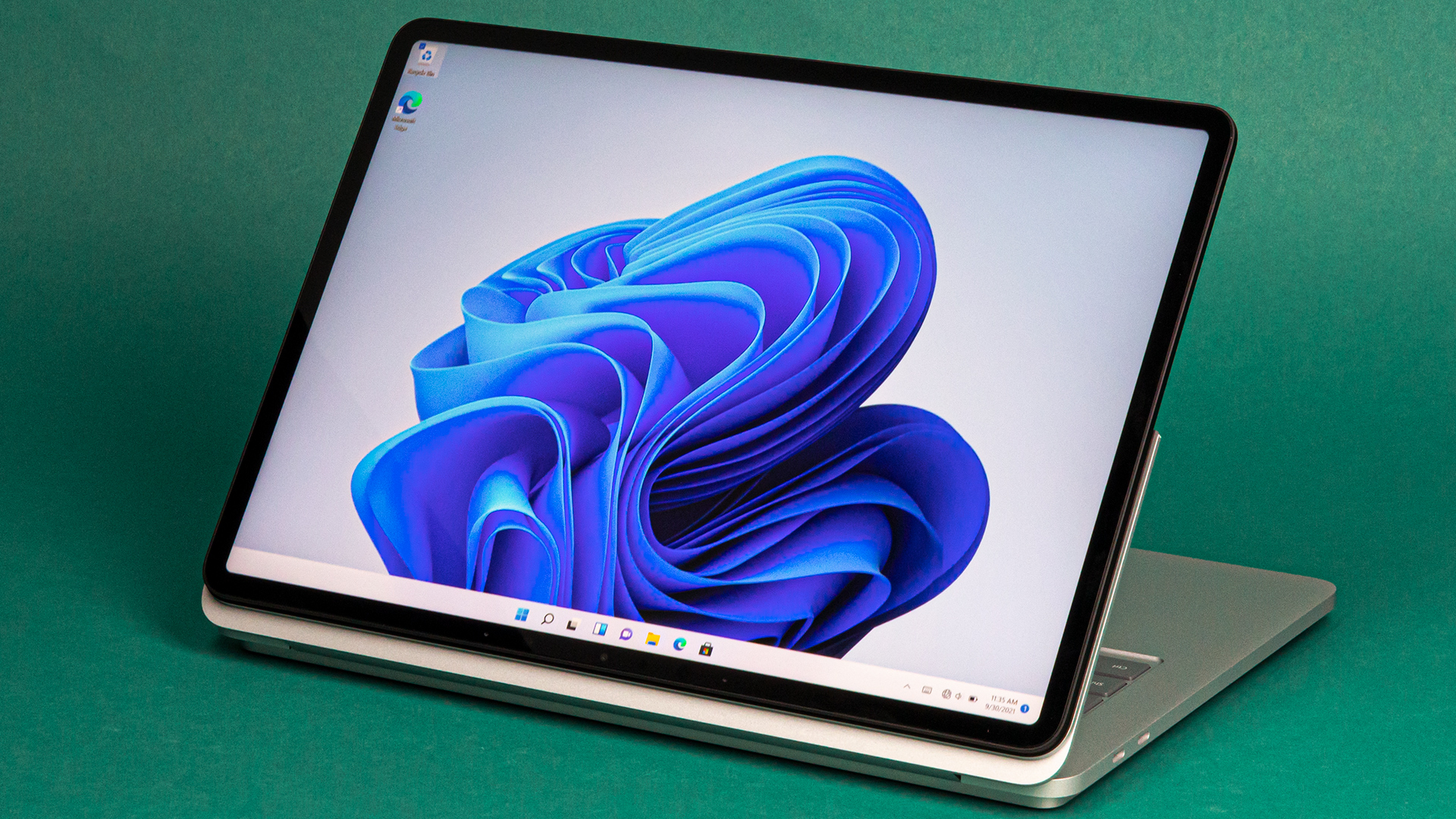 Part of the reason it costs so much is that it can do this.
Credit: molly flores / mashable

Before we get into how the Laptop Studio works on a moment-to-moment basis, it’s worth looking at the spec sheet. Microsoft is selling it in a handful of different configurations, ranging from $1,599 to $3,099 in price. Here’s what you can expect from the guts powering the Laptop Studio:

Those are obviously some impressive internals, especially that GeForce RTX 3050 graphics card you get in the Intel Core i7 models. I’m not a fan of the port situation, but we’ll talk about that later. The only other problem is that the cheapest version that comes with said Nvidia GPU is $2,099, so anyone who’s looking for a gaming PC might be better off building one themselves if they can live without the portability of a laptop.

SEE ALSO: Dipping your toes into PC gaming? Here are 5 laptop options for under $1,000.

But even the least powerful Surface Laptop Studio is going to be plenty powerful for most everyday applications. I’d argue you shouldn’t pay $1,599 for a mere 256GB of storage, but the SSDs are removable if you’d like to go down that road. I almost feel silly complaining about price because there is no world where a laptop with those specs comes in under $1,000 in the current tech climate. But the cost of the Surface Laptop Studio will make it a tough sell for a great many people who might otherwise enjoy its distinctive physical characteristics. 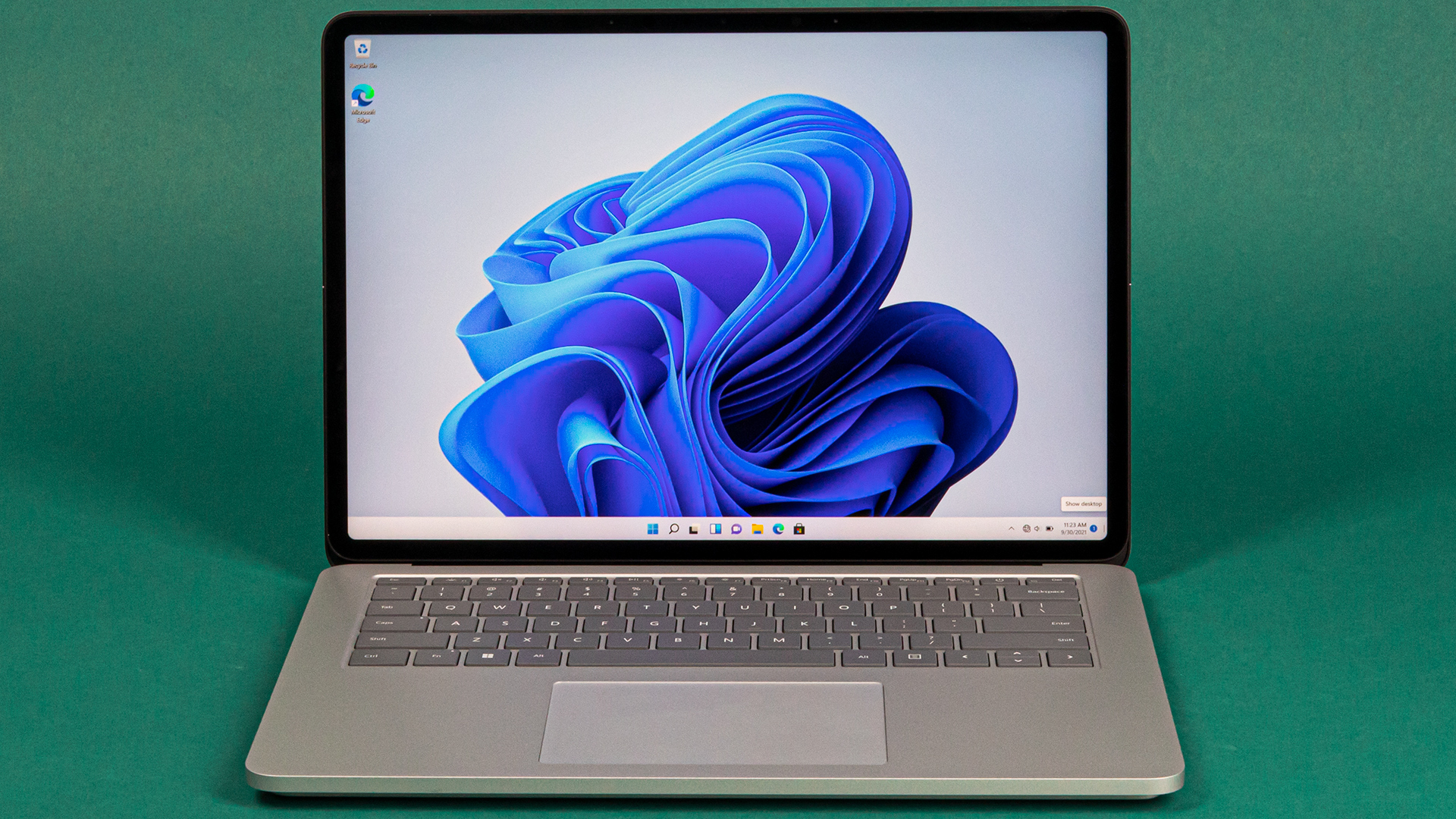 I had a great time with this.
Credit: molly flores / mashable

Those characteristics wind up being the best aspect of the Surface Laptop Studio. This is a gorgeous piece of hardware, with magnesium and aluminum casing in a single platinum color that I think makes it look sleek and tastefully futuristic. It is a tad heavy at four pounds, but I never found it to be overwhelmingly difficult to handle.

The 14.4-inch display is adequately sharp with a 2400×1600 resolution, to go along with a silky smooth 120Hz refresh rate that makes even the basic act of scrolling through Twitter feel a lot better than it would on a 60Hz display. You can optionally bump it down to 60Hz if you’d like to save battery life, but I wouldn’t recommend that. Just bask in the smoothness.

That display sits on what Microsoft is calling a “dynamic woven hinge” which can bend at up to 180 degrees, providing the Surface Laptop Studio with a selling point that most other laptops can’t claim. Unlike the removable screen from the Surface Book, this display is permanently attached to the keyboard but can be pulled forward to obscure the keyboard, making it perfect for watching videos or even drawing with a stylus — so long as the laptop is placed on a flat surface. Microsoft calls this “stage mode.”

I got a great deal of use out of stage mode. I spent much of an NFL Sunday with games on the Surface Laptop Studio screen in this pulled out position as my second screen, while the main attraction was on my TV. It’s light enough that you could put a big game, your favorite streaming series, or a Zoom call on the Surface Laptop Studio with the screen pulled out and carry it around the house with you as you do chores and whatnot, too. It’s not particularly burdensome to do any of that with a more traditional laptop, mind you, but there’s just something nice and elegant about the viewing angle you get in stage mode. The keyboard being hidden makes it feel like you’re carrying around a small TV and not a laptop.

That’s not all you can do with the hinge, though. You can pull the display out even further and lay it flush with the keyboard to essentially turn the Surface Laptop Studio into a very large and somewhat heavy tablet. I gotta be honest: I don’t think this is a great way to use this device. Four pounds for a laptop is a little on the heavy side, but within the range of acceptability.

As a handheld tablet, though, it can feel unwieldy to use without the support of two hands. The touchscreen is plenty responsive, though, so if you’re fine with the weight, this is perfectly serviceable as a tablet otherwise. 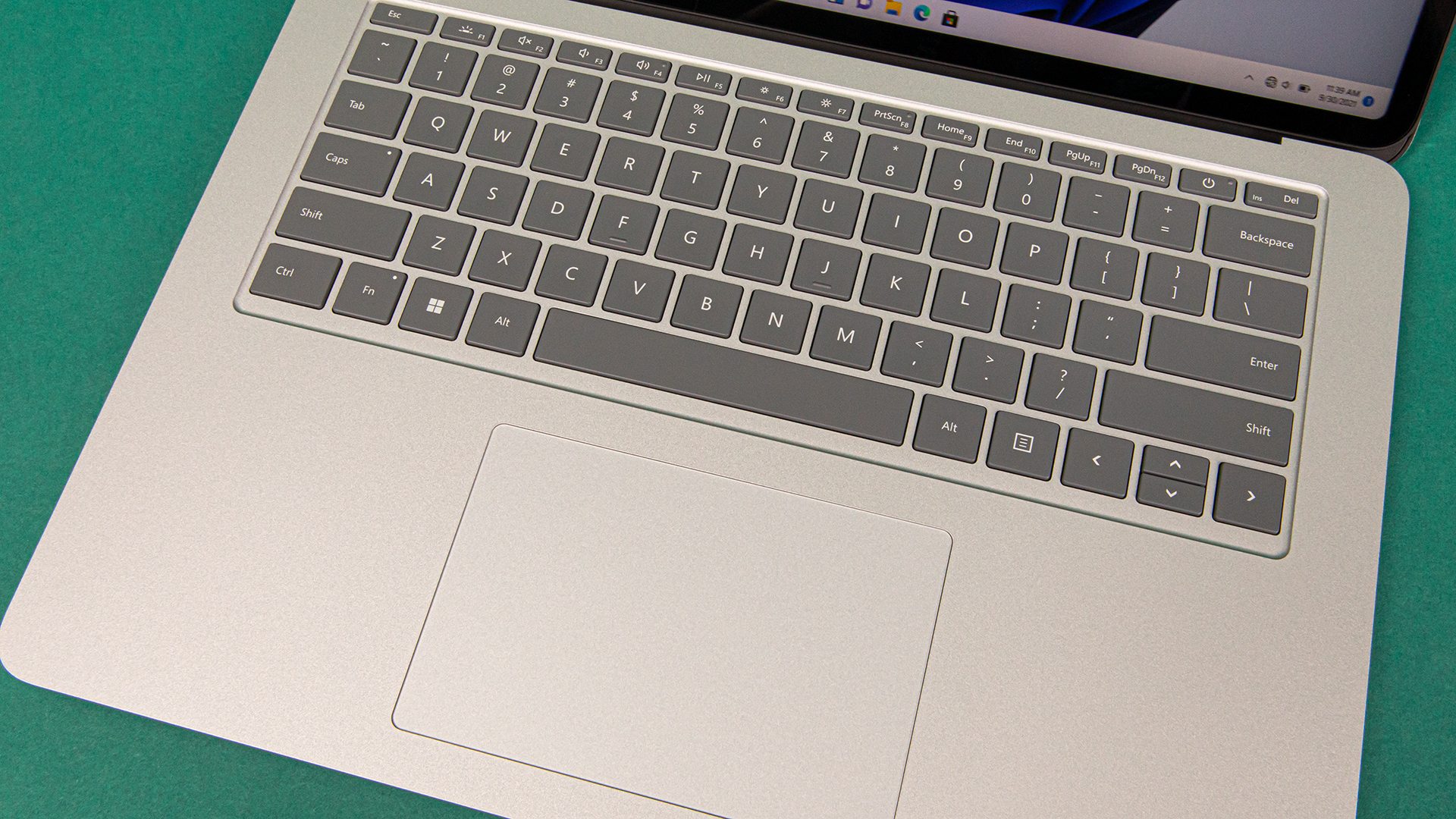 One major caveat here is that I can’t tell how sturdy the hinge will be over months or years of repeated use. In the several days that I got to spend with the Surface Laptop Studio, it never felt like it was anywhere near breaking or malfunctioning, but long-term use could introduce attrition.

Rounding out the body of the Surface Laptop Studio are an excellent keyboard and a unique haptic touchpad. The keys are spaced out just right, with plenty of key travel to make each button press feel substantial while remaining pretty quiet. As for the touchpad, the main differentiator between it and most other laptop touchpads is that you can press down on any part of it and it will register as a click. If you drag the mouse cursor to an upper corner of the screen and want to click, it’s no longer necessary to move your finger down to the bottom left corner of the touchpad to do so.

This is a small thing that actually feels pretty transformative. I still haven’t fully broken my touchpad muscle memory and embraced the Surface Laptop Studio’s way of doing things, but every time I remember I can do that, it’s a little bit thrilling.

There is sadly one thing about the Surface Laptop Studio’s hardware that I’m not super hot on: Ports.

No ports in this storm 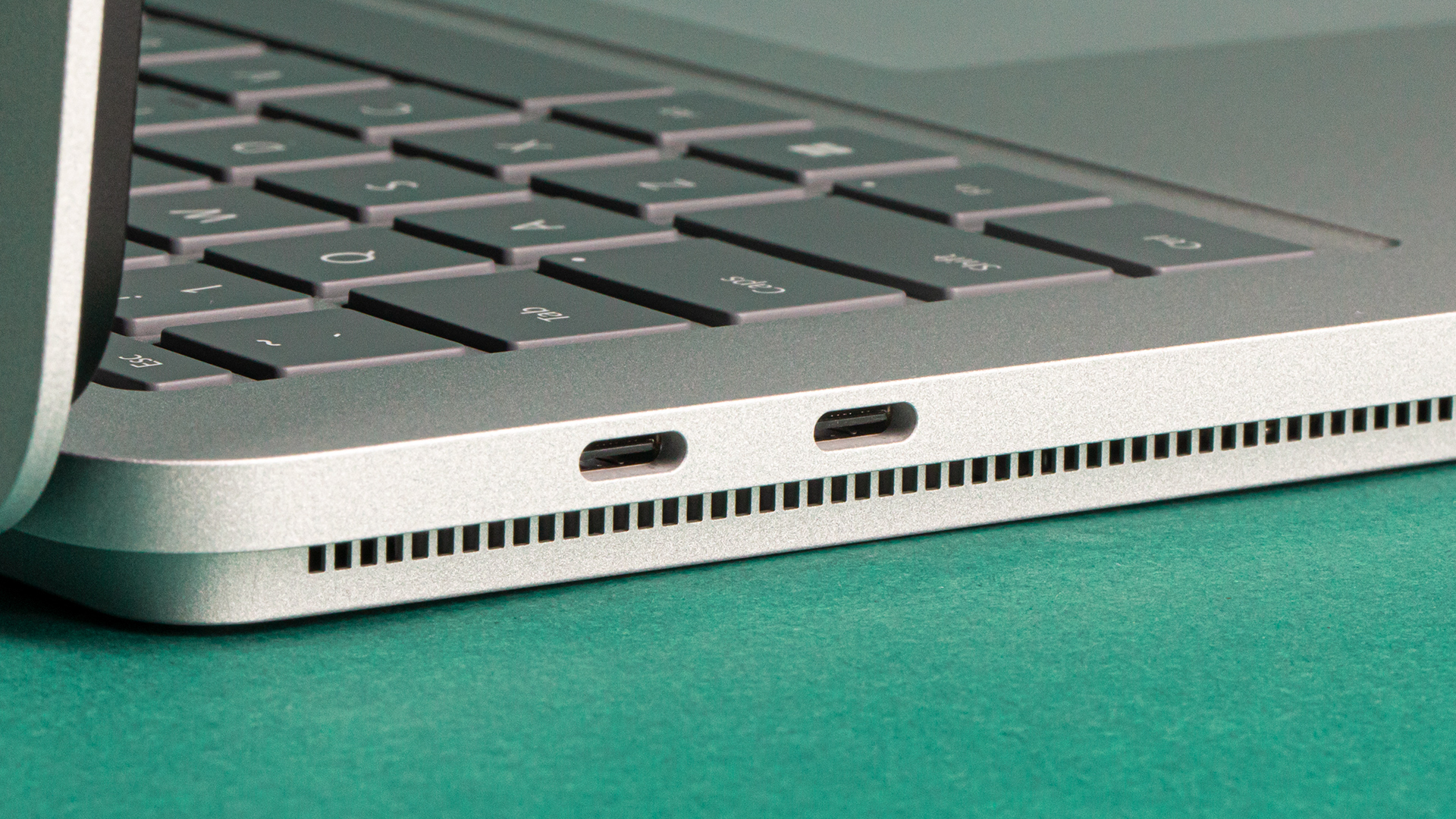 Put simply, two USB-C ports and a dedicated Surface Connect charging port are not enough for something that costs $1,599 at its very cheapest. Even my 2015-era MacBook Pro, a device that provides plenty of frustration thanks to increasingly slow performance and a terrible keyboard, has twice as many USB-C ports. Alienware’s beastly M15 R3 gaming laptop, which actually starts at a slightly lower price than the Surface Laptop Studio, has every port you could possibly want.

I get that not every laptop is made for the same purpose. If Microsoft doesn’t want this to be a serious gaming laptop, for example, there’s a case to be made for not including an Ethernet port or several USB ports like that Alienware laptop has. But a mere two USB-C ports is just not good enough. Even one regular USB port would’ve gone a long way, as a lot of professionals who might be in the market for a powerful laptop like this rely on that type of connection for computer mice, microphones, and other peripherals.

One positive note is that Thunderbolt support means those USB-C ports can be used to connect the laptop to external 4K monitors and other high-powered devices. That’s genuinely good. I just wish there was more to work with here. Still, despite a port shortage, Microsoft did nail performance, which is a fairly important thing to nail.

Steady as can be 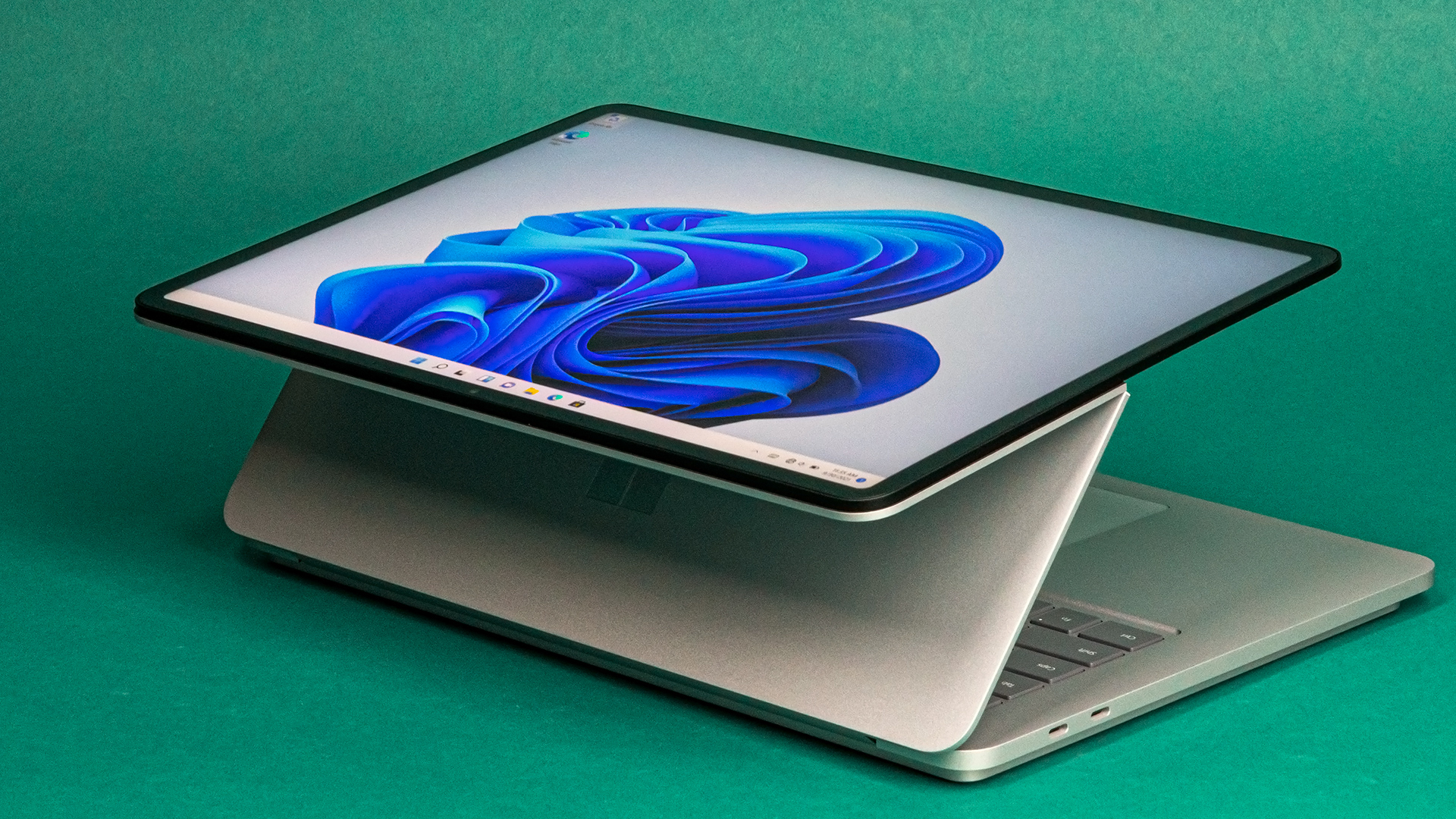 That hinge can do a lot.
Credit: molly flores / mashable

Microsoft sent me a high-end Surface Laptop Studio with the Intel Core i7 processor and 32GB of RAM, so it’s not a surprise that there were no performance problems to speak of in my testing. I don’t know a more simple way to say this than if you spend around $3,000 on this device, you probably won’t experience even the slightest slowdown or hitching in the process of doing everyday tasks like web browsing and working.

There were times when I had several different programs like Chrome, Slack, Steam, Discord, Word, Excel, and PowerPoint open at the same time across different Windows 11 desktops and the Surface Laptop Studio never broke a sweat. I can’t speak for the lower-end models, but what I experienced was nearly flawless from a performance perspective.

The only real flaws came when I tried gaming, and even that’s forgivable because this isn’t strictly a gaming laptop. With the i7 processor and RTX 3050 Ti GPU, I was able to get at least 60 frames per second performance out of Apex Legends and The Witcher 3 on around medium settings in both games. Jacking every visual setting up as high as it would go slowed things down to somewhere between 30 and 60FPS, and regardless of frame rate, the laptop’s fans go through a real workout whenever you play anything. It should be noted that you can connect an external GPU to the Surface Laptop Studio to theoretically boost gaming performance, but I wasn’t able to try that.

As for battery life, it’s fine but not life-changing. Microsoft rates the i5 models for 19 hours of usage and the i7 models for 18 hours, and that’s roughly what I got. A full charge got me through almost 20 hours with a heavy dosage of streaming and social media use, with a long overnight break where both the laptop and I were in sleep mode.

Microsoft’s new Surface Laptop Studio is so close to being great that its few imperfections sadly stand out next to everything the device gets right. This is a beautiful laptop with an intuitive and useful hinge that makes it ideal for a variety of different use cases, from general work to streaming sports or creating art. Its impressive specs are unfortunately tied directly to an extremely high price point, especially on the best models, that could push plenty of people away from what’s otherwise a great laptop. And even a great keyboard and cool touchpad can’t fully make up for a weak port offering.

If you’ve been looking to upgrade your Windows laptop in the run up to Windows 11, the Surface Laptop Studio is a great choice. Just know that it’s going to annihilate your bank account and you might need a USB-C-to-USB adapter or two.

How you’ll know the COVID-19 vaccines are safe How to Make a Leprechaun Costume