Are you a connoisseur of horror? You appreciate all flavors of this rich genre, from the spine-tinglingly spooky to the gleefully gruesome, from the sickeningly suspenseful, to the willfully outrageous. But maybe you’ve seen so many horror movies that it has become a challenge to find something fresh to thrill. We’ve been there, and we’re here to help.

Here are the 10 best hidden gems now streaming on Shudder.

Want something uniquely chilling? Then check out this 2017 Icelandic thriller set in a frigid and frightful landscape. Written and directed by Erlingur Thoroddsen, Rift follows a man (Björn Stefánsson) to a remote cabin, where he hopes to help his distraught ex-boyfriend (Sigurður Þór Óskarsson) and maybe find some closure over their breakup. However, their reunion is rattled by a series of strange events that suggest they aren’t alone. Something is in the darkness, watching and waiting. This fantastic film lures you in with beautiful vistas and a slow-burn pace, then spirals into scares sure to linger like a cold shiver down your spine.

How to watch: Rift is now streaming on Shudder. Have a passion for fashion and slashers? This midnight movie about killer jeans will be a perfect fit. Director Elza Kephart bleeds political commentary into this outlandish premise by weaving a subtext about the human cost of fast fashion. Wide-eyed ingenue Romane Denis stars as the naive new employee of a hip clothing corporation’s flagship store. Locked in overnight to prep for the hotly anticipated debut of “super shaper” denim, she and her co-workers must fight for their lives once they learn some clothes can kill. Studded with gory slaughter, goofy characters, and cutting one-liners, this stylish movie is riotous fun.

How to watch: Slaxx is now streaming on Shudder. 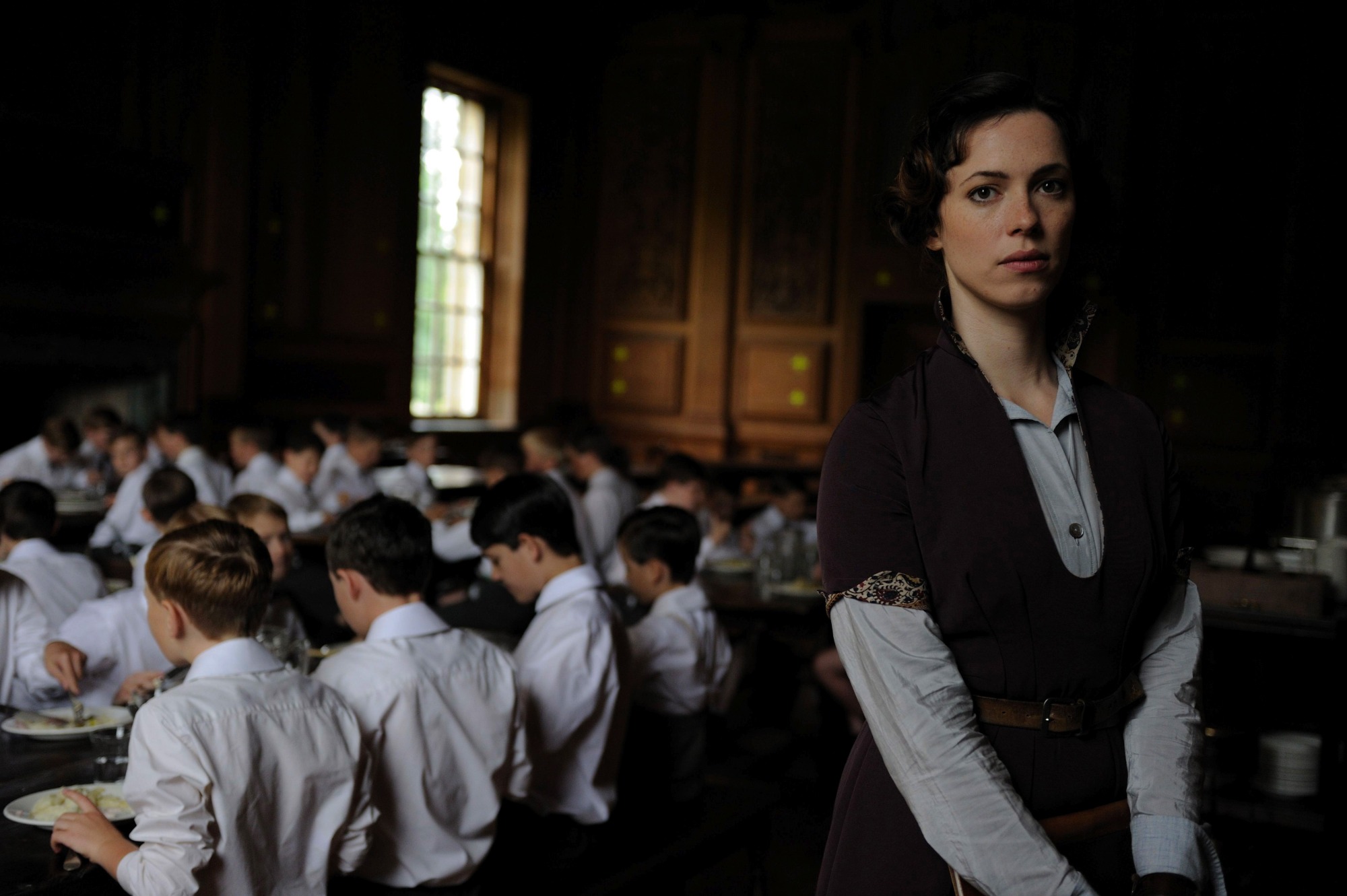 In the mood for an old-fashioned ghost story? Set in 1921 England, The Awakening centers on a professional skeptic Florence Cathcart (Rebecca Hall), who dedicates her life to debunking so-called clairvoyants and their showy seances. With ruthless reasoning and science experiments, she has exposed frightful frauds and infuriated believers. However, Florence may have met her match when she travels to a boys’ boarding school to confront a reportedly murderous apparition. Director Nick Murphy imbrues this spooky tale with suspense and dread, unfurling a final act that’s uniquely haunting. Dominic West and Imelda Staunton co-star.

How to watch: The Awakening is now streaming on Shudder.

Yearning for a dark comedy that’s bloody fun? You’ll fall hard for Nina Forever. Co-writers/co-directors Ben Blaine and Chris Blaine have dreamed up a truly deranged tale of love and letting go, and it all begins with a macabre crush. Grocery clerk Holly (Abigail Hardingham) hopes she can help mournful motorcyclist Rob (Cian Barry) forget his last girlfriend, who died in a grisly accident. But every time these new lovers crawl into bed, Nina (Fiona O’Shaughnessy) intrudes. Or more specifically, her broken and bloody corpse crashes the party with snarky one-liners and withering eye-rolls. Full of gore, sex, and jaw-droppingly outrageous gags, this horror-comedy earns its hard-R, yet delivers a surprisingly tender tale.

How to watch: Nina Forever is now streaming on Shudder.

What is Shudder? Everything you need to know about the horror streaming platform.

5. The Queen of Black Magic Something wicked this way comes in “The Queen of Black Magic” (2020).
Credit: sHudder

It’s a rare thing for a remake to outdo the original. Yet Kimo Stamboel’s gruesome 2019 offering does just that by upping the ante on body-horror with frightfully realistic gore. Deep in rural Indonesia, a humble orphanage is supposed to be the site of a warm reunion between three friends (Ario Bayu, Tanta Gintin, and Miller Khan), who long ago spent their boyhoods there. But in the past and in this place, they buried a terrible secret. Now, something horrid has risen to claim vengeance on them and their families. With creeping dread, stomach-churning scares, and ruthless supernatural twists, this one is not for the faint of heart.

How to watch: The Queen of Black Magic is now streaming on Shudder. Shudder boasts a robust documentaries selection, which offers audiences deep cuts into their favorite movies or horror subgenres. The best of the bunch is this funny, personal, and political exploration of the infamous A Nightmare on Elm Street 2: Freddy’s Revenge. Long mocked for its queer content, the subversive sequel proved a nightmare for its unconventional scream queen, Mark Patton. However, directors Roman Chimienti and Tyler Jensen present the charismatic Patton with the opportunity to reclaim the narrative (and share a slew of stories, both thrilling and heartbreaking). The result is a bio-doc that’s sensationally bold, surprisingly funny, and proudly gay as hell.

How to watch: Scream, Queen! My Nightmare on Elm Street is now streaming on Shudder.

Seeking something sloppy, silly, and unapologetically dumb? Then revel in the bad taste of this seasonal slasher about a homicidal snowman. It all began on a wintry night when a vicious serial killer named Jack Frost (Scott MacDonald) met with a corrosive chemical accident that melded his rotten core into sentient snow! Director Michael Cooney festoons this cult classic with gleefully ludicrous slayings, cringe-worthy sight gags, and practical effects so bad they’re hilarious.

How to watch:Jack Frost is now streaming on Shudder. A family observes a zombie from a safe distance in “Zombie for Sale.”
Credit: Christine rampage / amc networks

What if zombie bites weren’t all bad? More specifically, what if a nip from the undead would give the impotent new life below the belt? That’s the preposterous premise that kicks off this gleefully bonkers South Korean comedy. The Park family is scraping by running a battered gas station when their fortunes are turned by a zombie (Jung Ga-ram) with a rejuvenating bite. That’s just the first act of director Lee Min-jae’s playful horror-comedy. Family hijinks, ghoulish action, gross-out gags, and absurdly earnest romance also pop up, making for a movie that is chaotically charming and pleasantly unpredictable.

How to watch: Zombie for Sale is now streaming on Shudder.

“Vengence is Hers” is a Shudder collection that offers an array of nail-biting tales about women fighting back with all their might and no regrets. A standout in this section is this critically acclaimed 2017 action-thriller from writer/director Coralie Fargeat. Matilda Lutz stars as an American socialite, who’s living it up as the girlfriend of an obscenely wealthy playboy. That is until a horrid betrayal leaves her battered, broken, and left for dead. Filled with righteous wrath, this party girl hurls herself into a scorching quest not only to survive but also to burn down the men who tried to destroy her. Electric with bone-crunching violence and candy-colored accents, Revenge is as ferocious and feminine as its rampaging heroine deserves.

How to watch: Revenge is now streaming on Shudder. Before there was Home Alone, French writer/director René Manzor dared to dream up a kid-centered holiday home invasion that is unapologetically scary. Since its 1989 debut overseas, this festive thriller could not get a US theatrical run. So, it became a coveted treasure for American horror fans, who’d heard of its heady combination of terror, twists, and toys. Mazor’s own son, Alain Lalanne (credited as Alain Musy), stars as a clever boy, who must use all his wits and playthings to survive the night, once a menacing mall-Santa breaks into his home hellbent on homicide. Forget paint cans and Wet Bandits. Manzor’s spin on this story is far darker, zanier, and bolder, making for a movie that’s outrageously funny, truly frightening, and ultimately unforgettable.

How to watch: Deadly Game is now streaming on Shudder.

The Apple TV 4K just got a rare discount