Let’s get straight to the point: The holidays are here, and if you love someone who’s a pizza hobbyist — you know, the type with 00 flour and a baking steel in their pantry — then an Ooni pizza oven is a fantastic gift.

I love cooking — it’s one of my favorite hobbies — and I find pizza-making to be pretty fun. Before testing out the Ooni, I relied on homemade dough and sauce, but was left rolling it out on a sheet pan and cranking my oven as high as it went. Using the Ooni was an entirely different universe.

Here’s an example of what my oven pizza looks like. It was delicious, but the rise in the dough was minimal and the crust was heavier and more slow-baked flatbread than fluffy.

Now look at the puffy, Neapolitan-style veggie pizza I made in the Ooni. It’s way more pizza and far less flatbread. 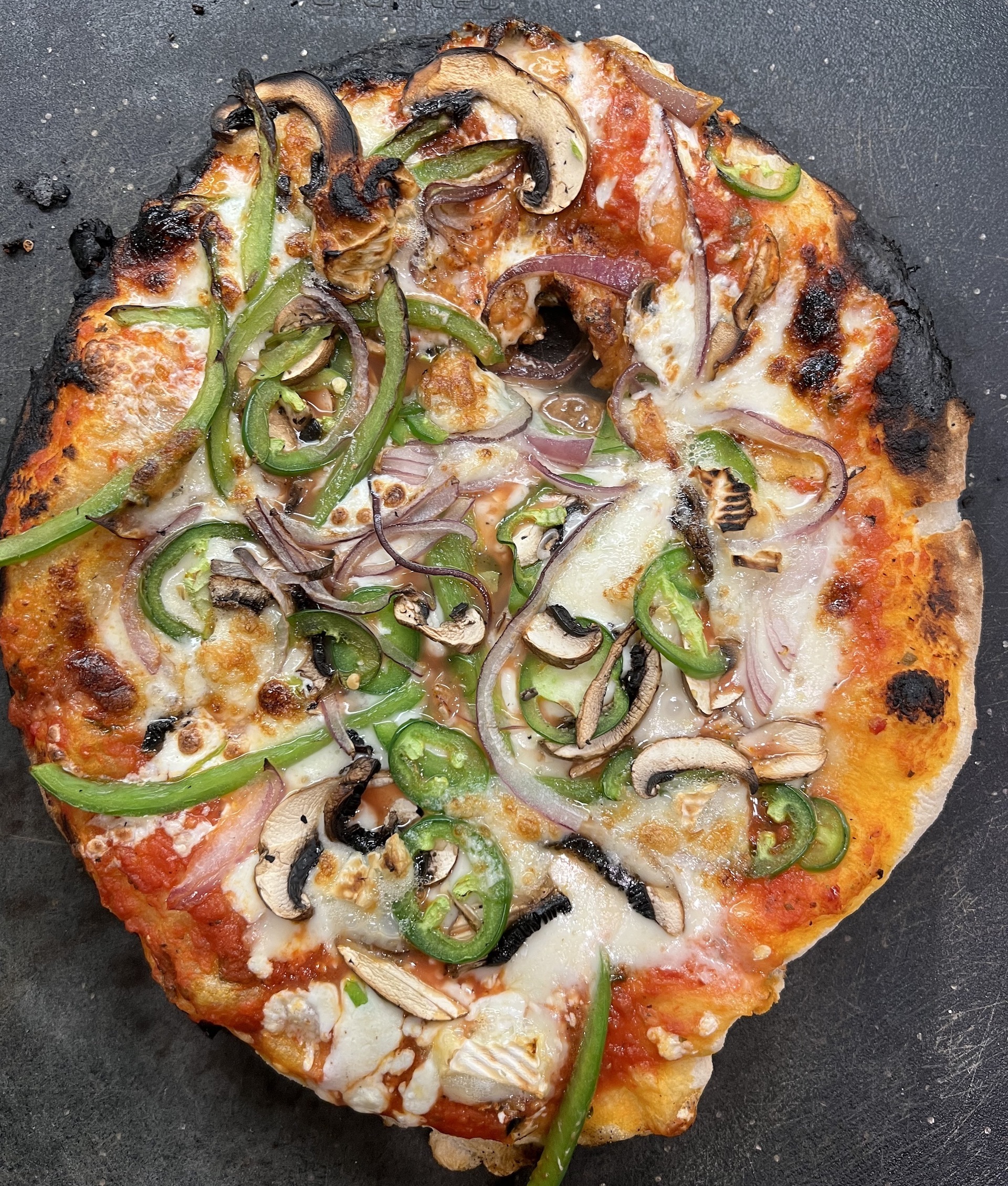 Look at that char, baby. And yes, there a big globs of brie on it.
Credit: mashable

So before we get too far into the pizza itself, let’s look at the oven. Here it is, set up in my backyard. It’s pretty sharp looking and light, just 22 pounds. You could carry it anywhere. I imagine it would be a hit at a tailgate. 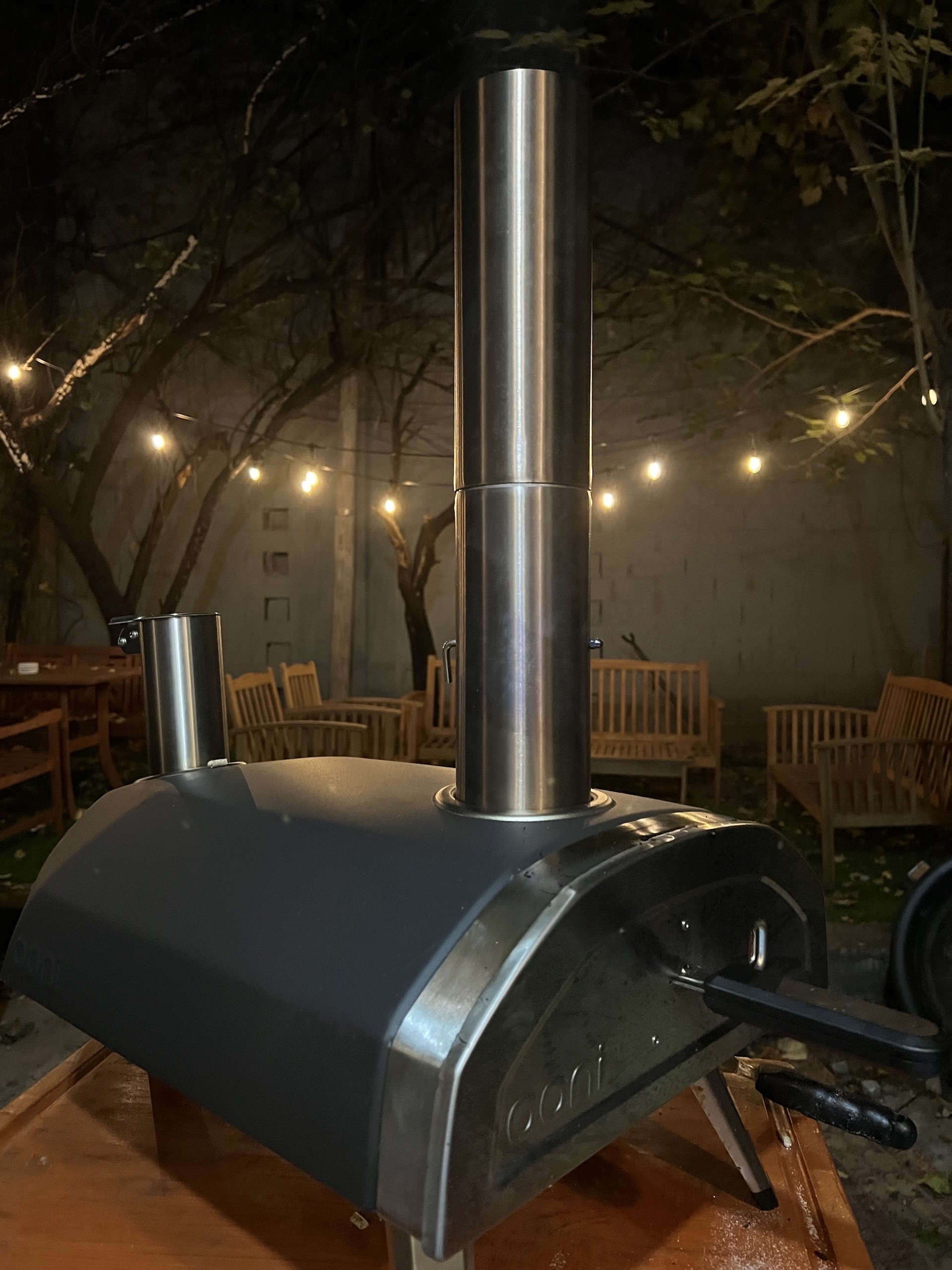 The Ooni was big enough for pizza making, but small enough to not be cumbersome.
Credit: Mashable

The Ooni was incredibly easy to assemble — I had it out of the packaging and together in like 15 minutes — and the theory behind its operation is simple. A heat source, in my case wood pellets, feeds a fire that licks around the top of the small oven, creating high heats that quick-cook a pie on an inset pizza stone.

I tested out the wood pellet pizza oven designed to cook 12-inch pies. I wanted to test the wood-fired oven for three reasons:

All you needed to do to operate the oven was light a fire-starter on a bed of pellets in a removable drawer on the back on the oven. Once those had fully caught fire, you slowly filled a hopper that gravity-fed the fire as it burned through pellets. The hopper had to be refilled from pretty frequently to ensure the heat stays consistent. 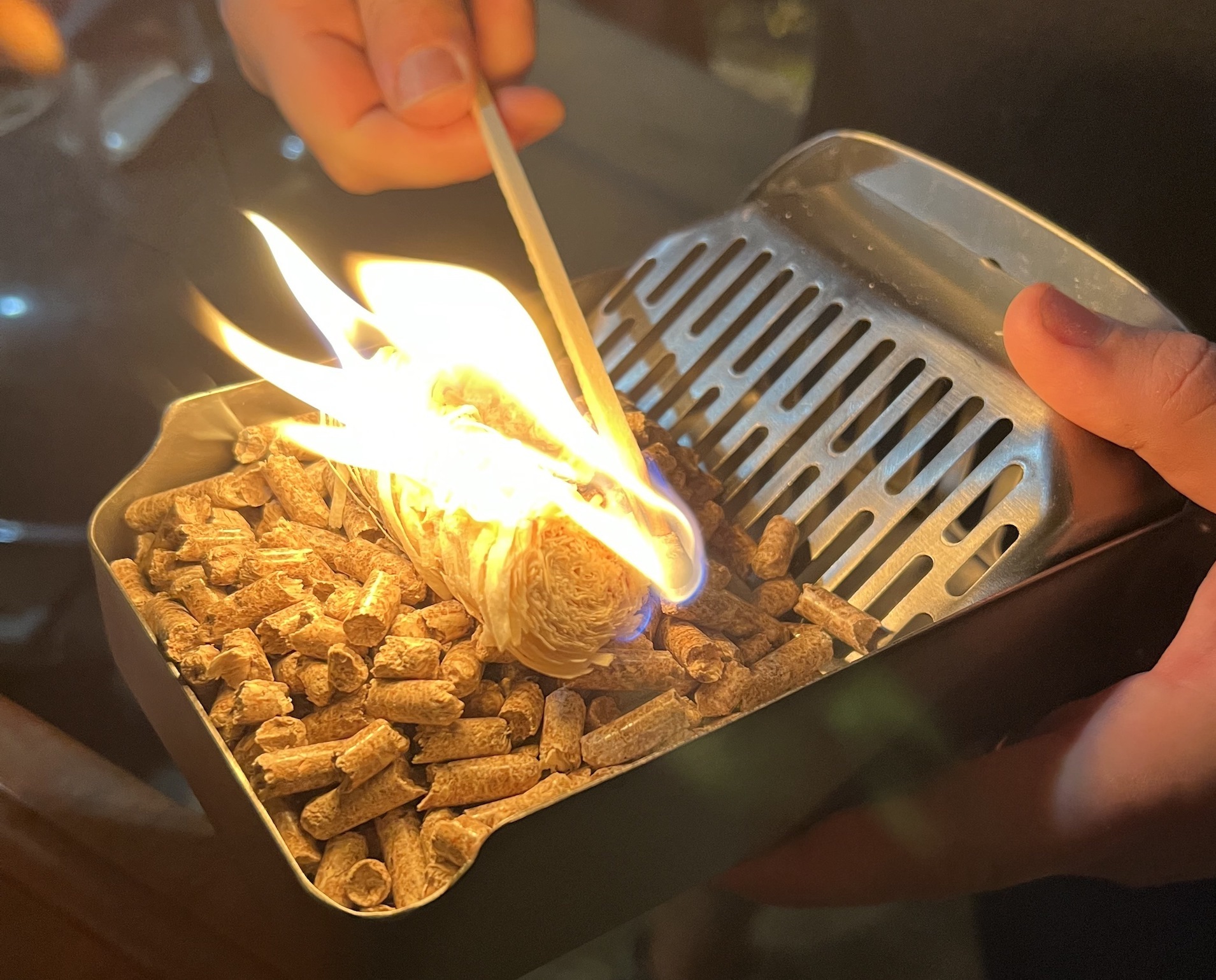 It’s always preferable to cook with real fire, in my opinion.
Credit: mashable

Once the fire got going, you simply had to make sure it had enough fuel. The only real source of heat control was adjusting a vent in the chimney, but it was, by no means, effective. You’re cooking hot and fast in this thing, no matter what. We’ll talk about this more later, but it gets so much hotter than you might be ready for. Ooni claims it gets up to 950 degrees Fahrenheit.

An important note: That heat did not transfer at all to the feet of the oven or surface it rested on. The oven itself didn’t get super hot on the outside either. I had the oven on a moveable wooden table and it was all fine. 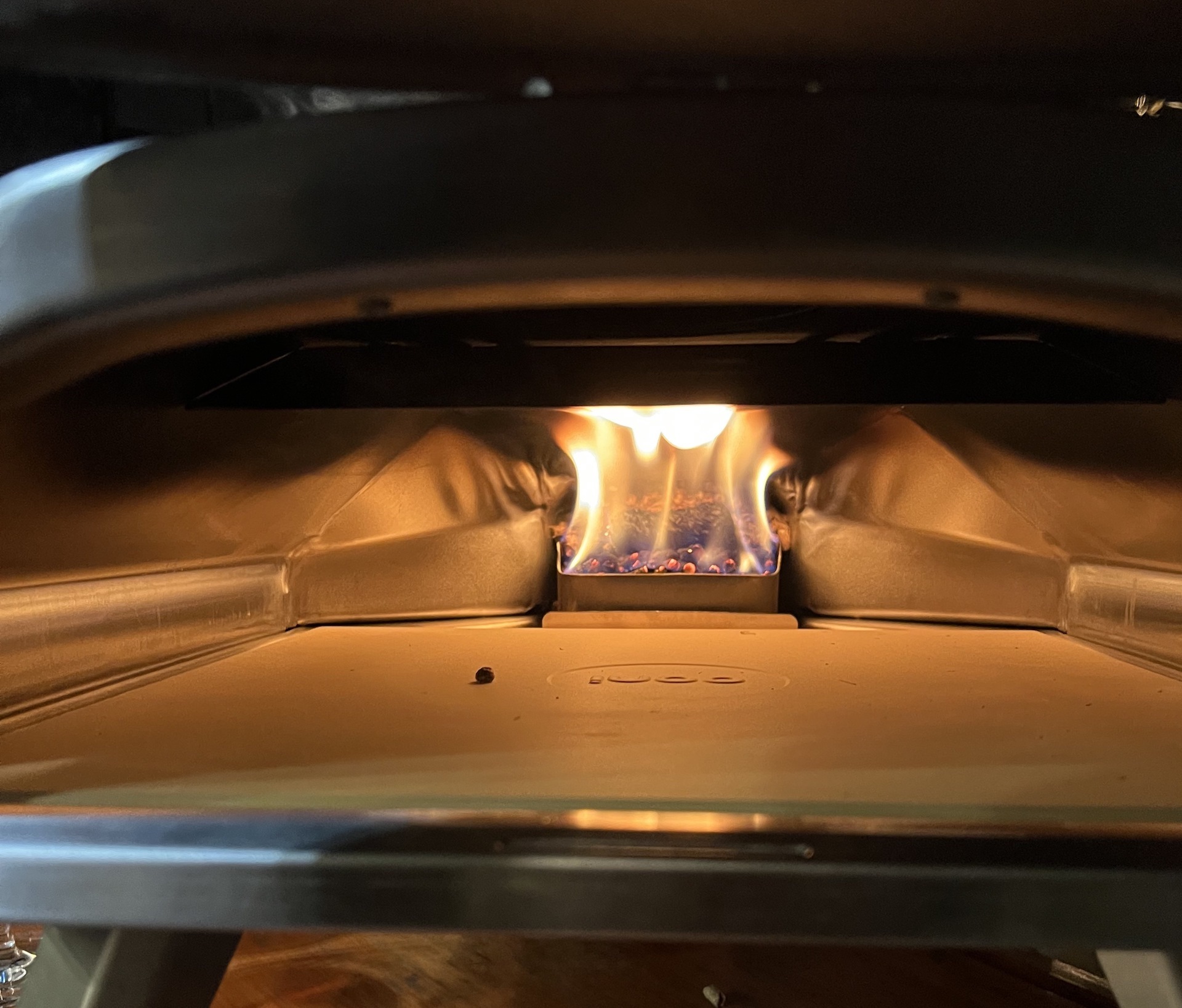 The oven, almost ready for a cook.
Credit: mashable

The TL;DR: This thing gets rip-roaring, omfg hot. There is no built-in thermometer — that’s a huge drawback, to me — but I stuck a meat thermometer into the oven when it was full blast. It rocketed past 600 degrees Fahrenheit before the thermometer beeped an error message — I had exceeded its abilities. I’d be surprised if it wasn’t 800 degrees when I started cooking. Oonis, according to the company, can get up to 950 degrees. That’s hot hot. To be clear, that’s a good thing. The ideal cooking temp for pizza is 800 degrees and up.

I was able to test the Ooni on four different pizzas. I made fancy, homemade dough with finely ground 00 flour. I made a simple, basil-forward pizza sauce. I rolled the dough super thin using an empty, floured beer bottle (my favorite rolling method). 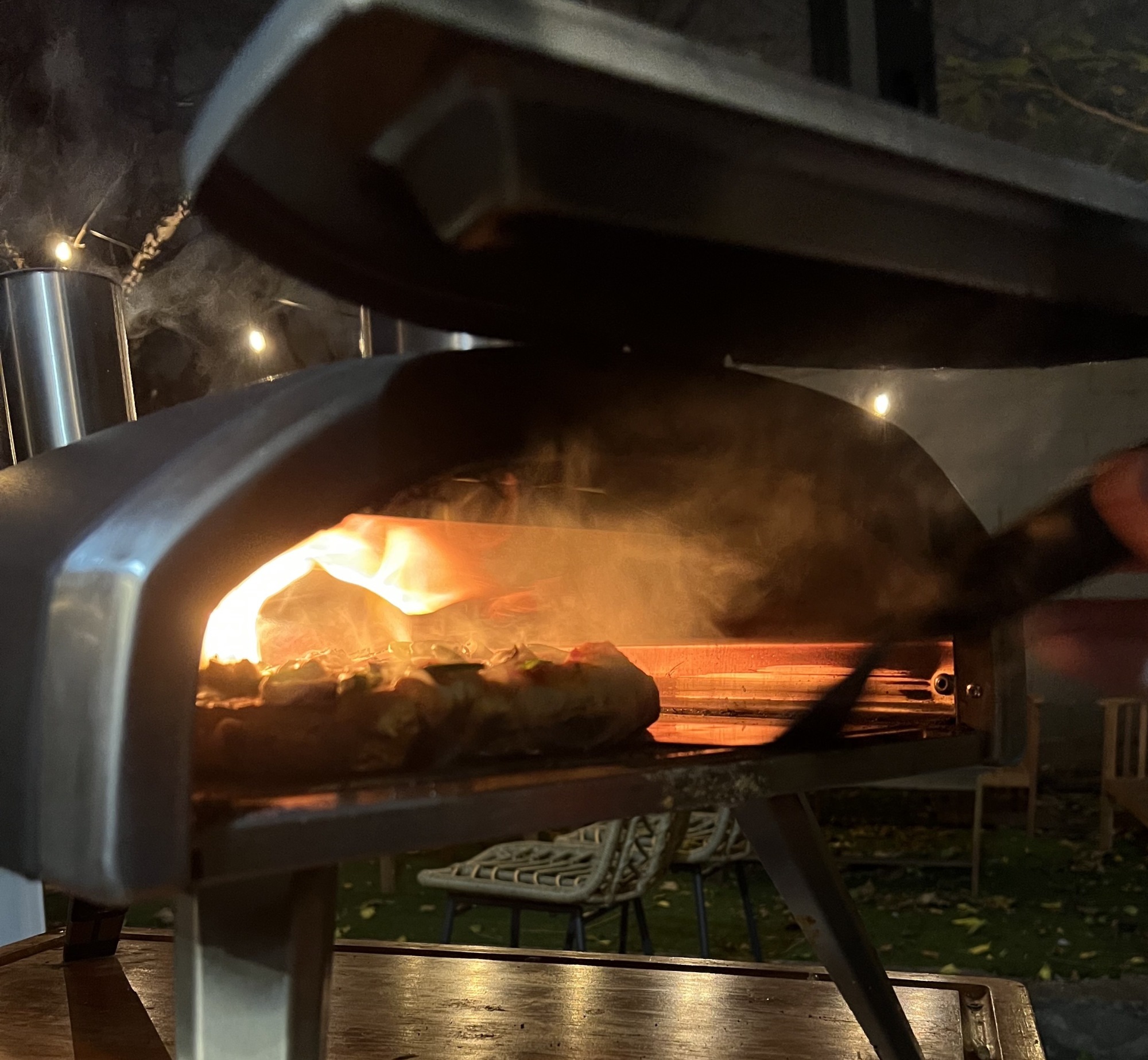 Look at that flame.
Credit: Mashable

And the first pizza I made — a simple pepperoni and mozzarella — well, it was an absolute disaster.

Why? That kind of heat creates a learning curve. I am an experienced home cook. I was not prepared for how fast my pizza would cook. I left the oven for about three minutes. I got distracted heading inside for something I forgot. The backside of the pizza practically turned into a charcoal briquette. I tasted it just to confirm it was bad and yep, it was awful.

To be fair, I should have known better. Ooni claims its oven can cook a pizza in just 60 seconds. Once I got the hang of it, I was definitely churning out pies in about two minutes, the added 60 seconds due to my turning skill being far from perfect. 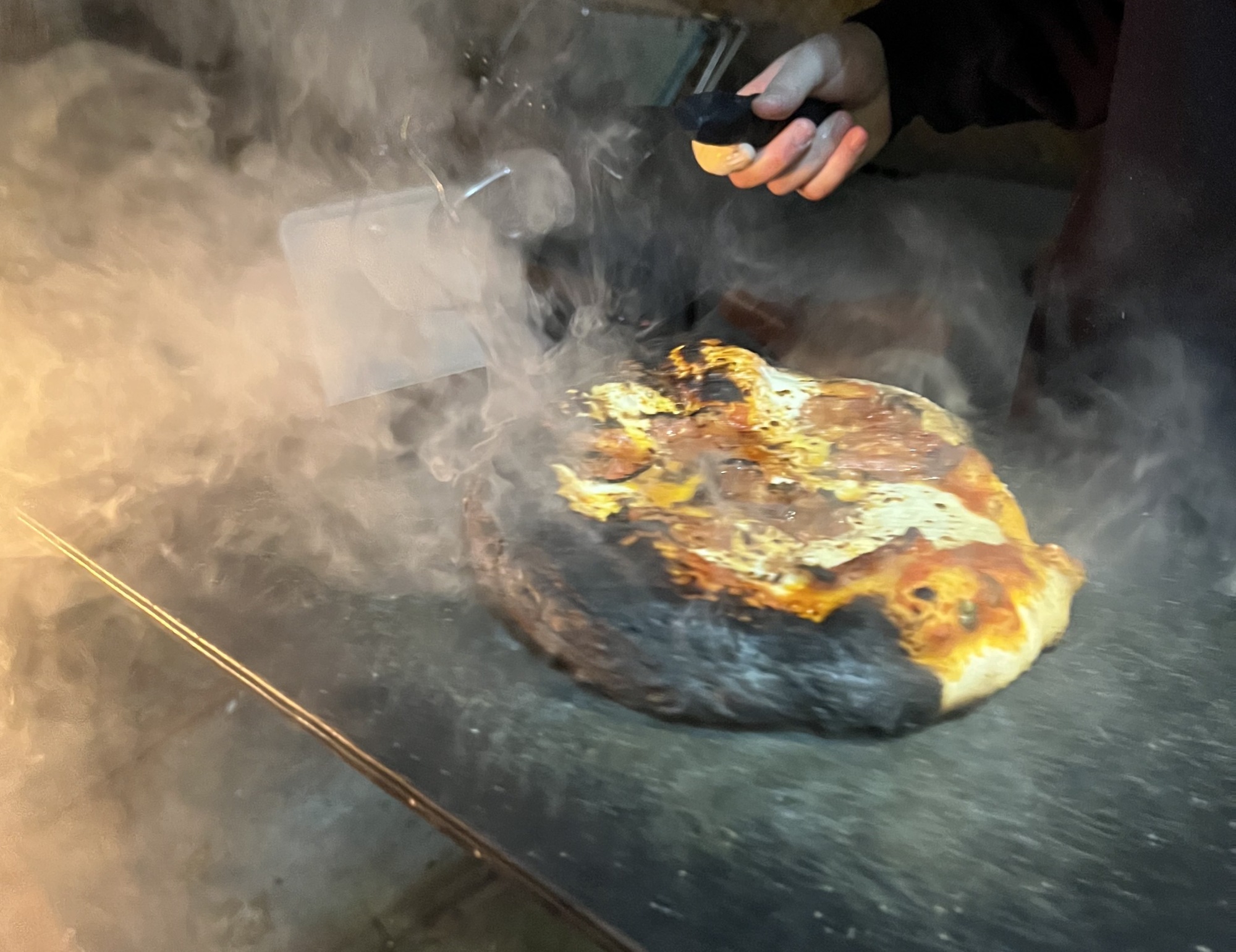 But even this obvious screw up was promising. Look at the non-burnt crust. It rose and bubbled and the pepperoni crisped perfectly. The cheese melted into beautiful pools of creaminess. It looked like Neapolitan pizza, just burnt.

The next three pies went well. I learned you’ve got to be ready to turn the pie once the bottom turns solid. I realized I barely need two minutes to fully cook the pies. And I figured out that turning the pizza correctly, timing the pie, and all that fun stuff was more of an art than a science. You had to really watch.

But look at this beauty of a cheeseburger pie. (I can’t do anything normal, sorry.) 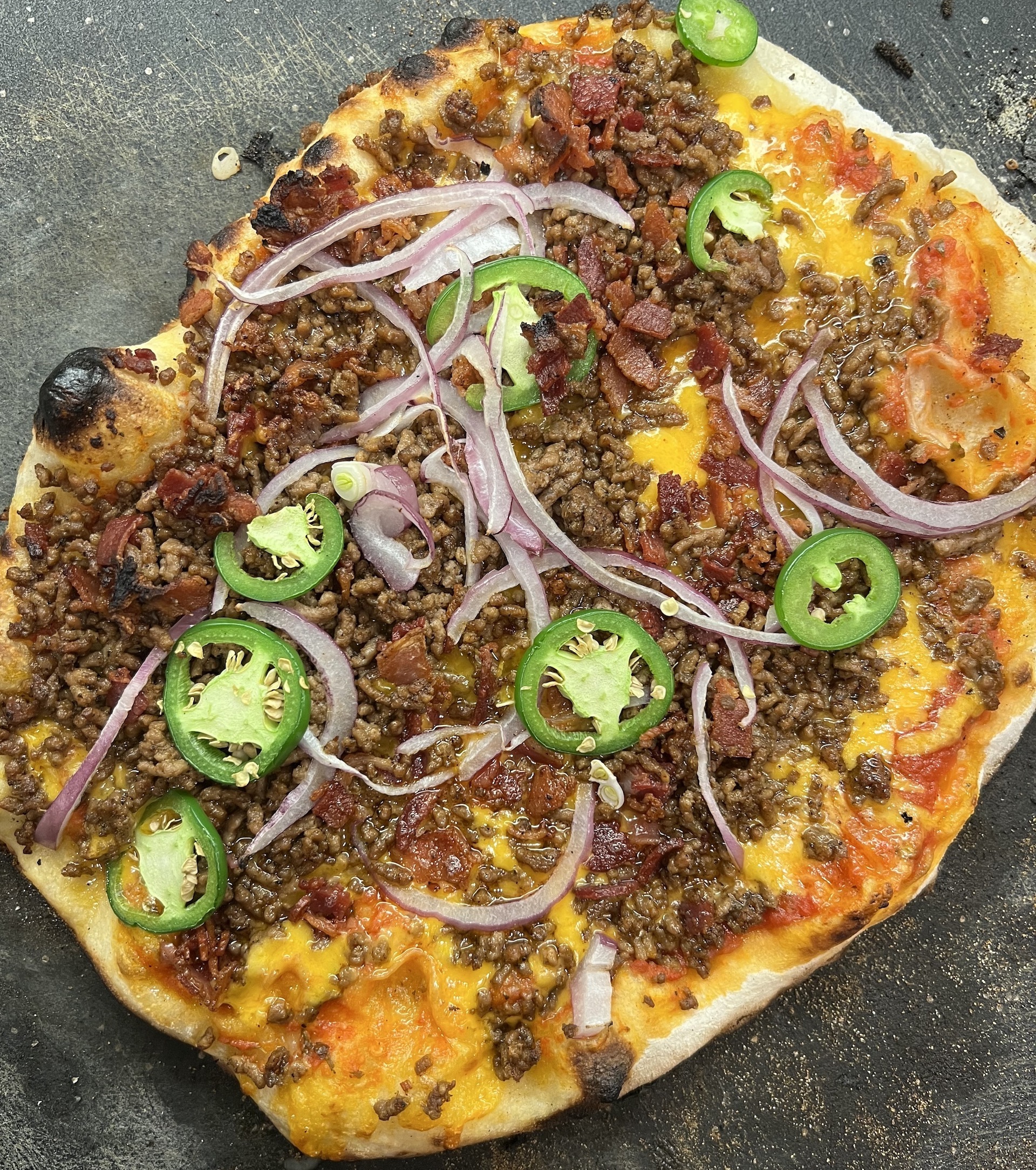 It took some getting used to, but eventually I fell into a good rhythm with the Ooni. Basically, it required a lot of care and active participation. Feed the fire, turn the pie, check the heat, turn the pie, feed the fire, pull the pie, put the next pizza in. And while it took focus, it also hardly any time at all to cook four pizzas. Fast, furious, and finished in no time.

Now, I did make mess loading the fire with wood pellets. It’s tough to watch a pizza and carefully load the little wood pieces. But that was a simple sweeping up after it was all finished.

The cleanup of the oven was pretty easy as well. I basically just let the heat rip, then took a ball of wet paper towel in tongs and wiped the stone clean. The high heat made any grime come right up.

The Ooni is really cool. And the wood pellet version, especially, I found to be neat. It produced restaurant-quality wood-fired pizza at home. You could taste the sweet smoke. And the super high heat gave you that pleasant char, bubbly crust, and impossibly fast cook time. There is no way, that I know of, to replicate this with an oven or stove. Even a nice grill might not get the wildly high temps of an Ooni because the Ooni is so tiny and portable. That small size means it’s super easy to heat to 900 degrees. You’re going to wait forever and a day for a grill to get that hot. The Ooni took about 15 minutes to get to temperature.

There are few things I test out where I think “oh wow that was really cool.” Great kitchen items especially elicit more of a “that’s so useful” than a “whoa, that’s fun.” But a wood-fired, super-high heat, portable pizza oven? That’s cool.

The only major drawbacks, to me, were the price and lack of built-in thermometer. I’m just the kind of person who likes to know the exact temp I’m cooking at. But that is, by no means, a deal breaker. You can buy a laser heat thermometer for like $23.

Now the price. When I tested it, the 12-inch wood-fired Ooni was selling for $349. The site has it on sale for $279.20, as of this writing, in anticipation of Cyber Monday and Black Friday. That’s not cheap but significantly less costly than a competitor like the Gozney Roccbox, which costs $499. Just be forewarned: You’re going to incur costs on necessary items like wood pellets and a pizza peel.

I’m not sure I would buy the Ooni for myself, since I enjoy cooking pizzas but I’m not obsessed. But people who love making pizza freaking love making pizza and I can’t imagine a much better purchase (or gift) for them than the Ooni. How to Air Fry Oreos