When you’re used to doing everything from an app, it’s easy to disregard a device that’s not super connected when it could be. Take robot vacuums, for example: Shiny new features like self-emptying docks, smart mapping of your home’s layout, and scheduling from your phone are almost expected at this point.

But there’s clearly still a market for bare minimum vacuums that don’t cost hundreds. The ILIFE V3s Pro is one of the most popular budget bots on Amazon. It’s basic as hell, but given its more than 11,000 five-star reviews, it must be meeting expectations of some sort. After testing high-end robot vacuums like the Roomba s9+ and Samsung Jet Bot+, I have to ask: How well does a cheap robot vacuum like the ILIFE V3s Pro actually work?

Setup consists of… putting batteries in a remote

The V3s Pro does not connect to WiFi and does not have an app. Instead, it comes with a remote that feels like a relic from 2005. After the archaic practice of inserting the included AA batteries, the V3s Pro is ready to respond to the remote (as long as you’re pointing at it). TBH, it was kind of relieving that I didn’t have to deal with the WiFi being stubborn or iPhone pop ups requesting local network access. Cleaning can basically begin right out of the box. Groundbreaking.

The remote has buttons to schedule, start auto cleaning, skim the walls, spot clean, and return to charge (though it’s also supposed to head to the dock on its own if the battery is low). The less-than-intuitive screen displays two times: one beside an analog clock and one beside an analog alarm clock. I had to watch a Youtube video to discover that the bottom is to be set to your local time and the top is to plan the time that the V3s Pro should start cleaning each day. It’s a 24-hour clock, so there is no a.m. or p.m.

The best robot vacuums for every budget

Easily the worst quirk of this remote setup is that the vac cannot handle two commands in a row. So many times I wanted to implement a spot cleaning when the vac came across a particularly high traffic area on auto clean, but hitting a second button shuts down the whole operation. (Same with accidentally pressing the wrong button.) The V3s Pro will sit and beep until you turn it off and back on.

It usually wasn’t an inconvenience to have to use the remote rather than control the vacuum with my phone. It was actually helpful for the times when my phone was charging in another room and I needed to start a spot cleaning ASAP. However, the lack of a pause button on the vacuum itself was annoying for time sensitive issues, like stopping the vacuum while it’s sucking up a charger.

Suction’s not tenacious, but is fine for hard floors

The ILIFE V3s Pro would be a reliable companion for light upkeep of rooms where hair and crumbs appear often, but not in such amounts that you need to dig out the Good Vacuum. Think kitchens, bathrooms, hallways, and other hardwood, tile, or laminate spaces with limited opportunities to wander off.

My first test for the V3s Pro was cleaning up a hardwood floor after three kids under 12 ate a very crumby breakfast. This little vac left the area spotless enough that I wouldn’t be worried about a piece of toast sticking to my bare feet. Though 600 Pa suction is about as dull as a cheap hand vacuum, it was also enough to pull in long hairs and even cat food on occasion. (I’d definitely suggest moving the actual food and water bowls to avoid a spill.)

The V3s Pro can do an OK job on low pile rugs or carpets as long as debris hasn’t been smushed down. It successfully picked up a few faux Christmas tree needles, pieces of tinsel, and a leaf, but its side brushes and suction weren’t enough to uproot crumbles of mud that had been stepped on.

The random cleaning pattern just hopes for the best, I guess

At the end of the day, the V3s Pro navigates by bumping around. With such blindfolded navigation, I personally found the V3s Pro to be a hands-off way to spot clean hard floors at most. I probably wouldn’t let it roam my apartment if I weren’t home, but it’s sure easy to whip out after dinner when I don’t feel like getting my stick vacuum.

Despite a complete lack of a methodical cleaning pattern, the V3s Pro covered more ground than I expected. It mostly covered the middle of the floor, near the walls, and under cabinets. Measuring less than three inches tall, the V3s Pro’s low profile can fit underneath those pesky cabinet cutouts rather than just reaching with a side brush.

The front line of infrared sensors were usually perceptive enough to skirt under chair legs without crashing into them. A few times, I watched it accidentally push itself under my kitchen mat and then back up, make a correction, and use its wheels to hoist itself over the mat. I rarely found the V3s Pro stuck on a rug corner, mostly because it perceived high-pile rugs as obstacles and didn’t even attempt it. Yes, it will still eat backpack straps and phone chargers. 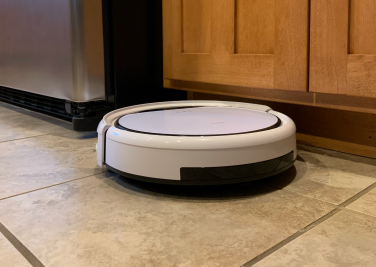 At 2.98 inches tall, the V3s Pro can scoot under cabinets. The V3s Pro relies on side brushes and a small opening for suction (not a brush roll).

The meager motor has its upsides. Since it’s not exactly creating a strong cyclone, the ILIFE V3s Pro is very quiet. (The boosted suction on spot cleaning mode is louder but only lasts for a minute or two.) And, because it’s not exerting the energy to dig into carpets or customize suction to floor type, the battery holds up well on one charge (around an hour and a half). The V3s Pro makes a lot of passes over the same spots to be more thorough with its chaotic driving, but at least it won’t die in the middle of that.

The V3s Pro omits the classic brush roll design that an overwhelming majority of other vacs use. Instead of a spinning brush that spans the diameter of the vacuum to scoop up hair through a velcro type of situation, the V3s Pro completely relies on two spinning side brushes to push debris into the path of a three-inch-wide opening on the bottom of the vacuum.

This approach is far less lucky on carpet than it is on dry floors where debris is loose and sliding around. No brush roll means less tangled hair which means less maintenance, but it’s worthwhile for anyone who needs those carpets combed.

If you have shedding pets and lots of carpet, note that the bullet points in the Amazon listing state that the V3s Pro “focuses on picking up hairs, dirt, debris on hard floors.” I can’t really be mad at it for glossing over fuzzies and tufts of fur on carpets because it doesn’t claim to be tough on those.

Are you lost, little vacuum?

Between the skimpy cleaning path and absolutely no sort of methodical navigation, it’s almost as if the V3s bumps around and simply hopes it skims directly overtop the mess.

The lack of self awareness is an issue when docking, too. The V3s rarely made it back to its dock on its own. It would get so close, turn around at the last minute, bobble in the opposite direction until it gave up. It was like watching a car keep missing its turn and circling around the block. And this was in spaces under 1,000 square feet.

Of course, the V3s Pro’s lack of WiFi, onboard cameras, or LiDAR sensors means it can’t be sent to specific rooms or follow virtual boundaries. (Magnetic boundary strips are compatible but not included.) No mapping is probably a non-issue if you only have a few rooms anyway, but don’t expect it to remember where it has already swept like more advanced vacs can.

Are cheap robot vacuums worth it?

The ILIFE V3s Pro probably works as well as you’d expect a $160 robot vacuum to. But that simplicity totally works if your cleaning needs aren’t much more than a daily, diet tidy on hardwood, tile, or laminate with few personal items laying around.

Its detachment from app-powered schedules was genuinely handy for spot cleaning hard floors. It doesn’t overcomplicate things by making you dig your phone out of the couch to clean up some shredded cheese. For some, the straightforward approach to cleaning will be less of a chore than messing with an app’s bells and whistles.