By now, part six of And Just Like That…, the much-discussed HBO Max reboot of Sex and the City, has made the rounds on social media, and mainly for one thing: the premise of Diwali. The Hindu festival and its portrayal on the show was the subject of both discussion and dismay, mostly with Indians and South Asians like myself bemoaning the blatant tokenism and cliche-ridden narrative.

The episode itself is called “Diwali,” but there is little screen time devoted to the celebration at all. That might have been permissible, but the onscreen handling of Diwali, Hinduism, and Indian culture in those notably brief moments is painfully lazy.

Each small trope related to Diwali was glaringly mishandled, starting with the fact that Carrie (Sarah Jessica Parker) somehow doesn’t know what Diwali is, which I found extremely hard to believe considering she has lived in New York for decades. She’s also in her fifties, a seemingly cosmopolitan citizen of the world, and a writer.

Then there’s the sari debacle, which was almost too difficult for me to sit through. While accompanying her realtor/friend Seema (Sarita Choudhury) to a store in Soho, Carrie turns to her — apparently well-meaning — and says dreamily, “These clothes, this holiday…I need to know everything all about it.” Carrie’s curiosity in itself is wholly normal, but her ignorance just isn’t. Seema, in turn, provides a basis explanation of the Festival of Lights, which I would like to think most people would be able to. Seema is pushed into the role of teacher and mouthpiece, existing to educate Carrie on culture and diversity. It seems erroneous to have reduced a person of color to this role, patiently drawing a picture for a white character who should perhaps know better. Lines like “It’s cultural appreciation, not cultural appropriation,” are a testament to the show’s higher purpose of bringing its characters into the twenty-first century. And yet, the way they’ve chosen to do so is grossly misled.

The encounter only gets worse when the clothes that are being examined are incorrectly referred to by both characters. The “saris” Seema and Carrie are drooling over (fair enough), are not actually saris at all (problematic). Instead, they are lehengas, a totally different version of Indian traditional wear. Yes, saris are more ubiquitously known around the globe, a term freely used by many and deeply associated with Indian culture. Sure, it would be easier for the audience to instantly understand what a sari is. But would it have been so hard to introduce another facet of Indian culture, to use the right word for a piece of clothing?

Throughout, it appears that the writers simplified the show’s foray into diversity, providing the most simple and surface-level depiction of the culture at hand. The opportunity to move away from stereotypes was certainly present, but deeply disregarded.

But perhaps the greatest error in this episode was the storyline around marriage. I am well aware that arranged marriages and the concept of marriage in general are embedded in Indian society, with great importance historically placed on the institution. But for too long, this concept has been conveniently plucked by Western media and plopped into the narratives of South Asian characters and culture. The idea that a self-sufficient, 50-something professional like Seema has to hide her single status from her parents is just a tired extension of this stereotype. That she felt the need to invent a fake white boyfriend named Dennis is telling enough. 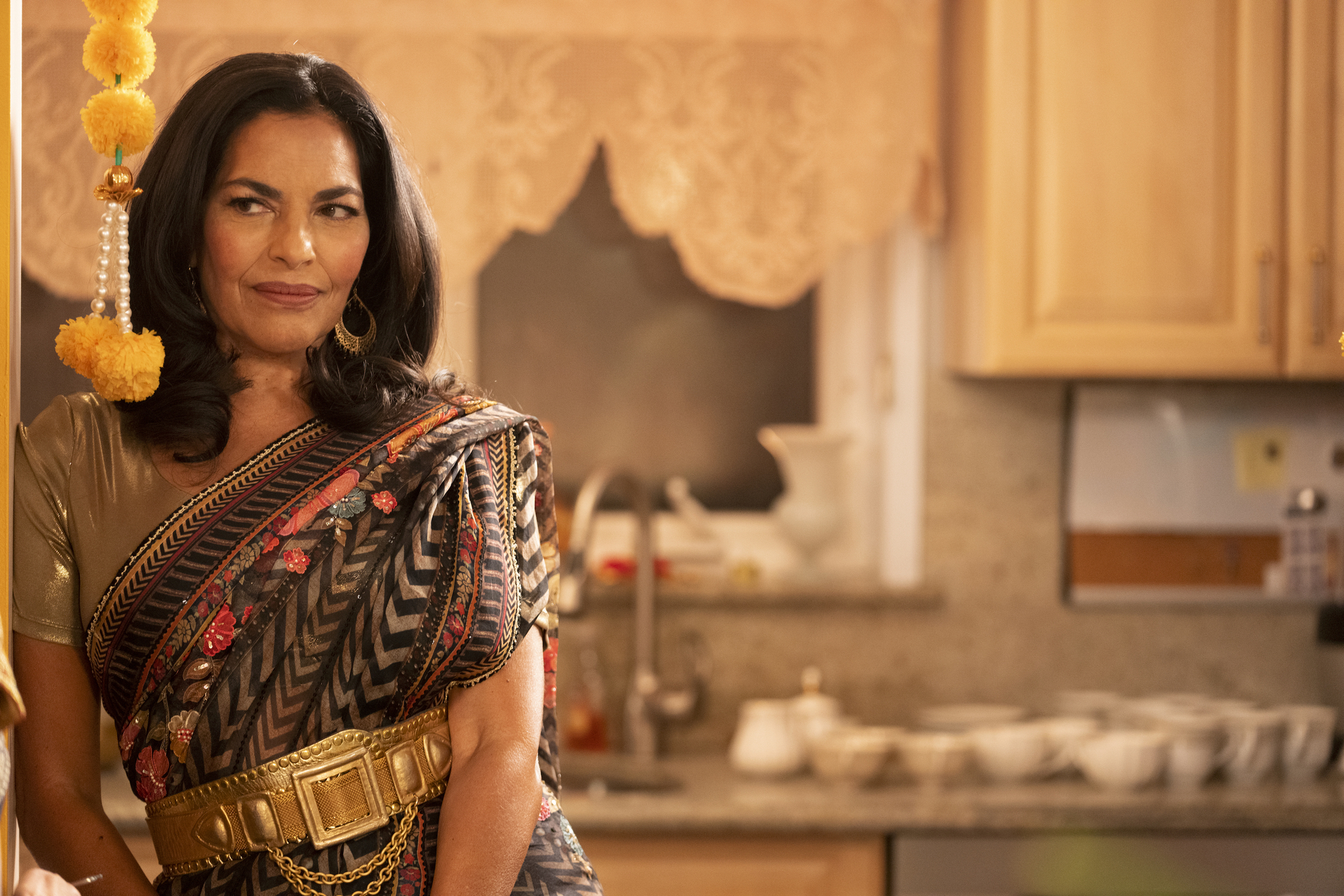 Sarita Choudhury plays Seema in “And Just Like That..”
Credit: Craig Blankenhorn/HBO Max

It seems too much to ask that a progressive portrait of an Indian woman be painted onscreen, one in which her parents don’t insist that she needs to be ‘completed’ by marriage, and instead take pride in her career and personhood. Thankfully, Seema’s parents (Ajay Mehta and Madhur Jaffrey) do seem to prioritize their daughter’s happiness above all else, but marriage goes hand-in-hand with their perception of what her happiness should look like. How welcomingly disruptive it would have been to show an Indian family pushing against these well-worn ideas.

SEE ALSO:
‘The Office’ episode ‘Diwali’ is still a master class in representation

The thing is, I was genuinely intrigued by this episode, how they would concoct a narrative of such an important festival, the clothes Carrie would inevitably wear, and the impression of Indian culture And Just Like That… would present. I was impressed by the inclusion of well-known Bollywood track “The Humma Song,” and the Indian wear chosen, which was aesthetically pleasing to say the least.

However, the undercurrents of the episode were too cringe-inducing to ignore. To me, it’s largely neglect that resulted in an episode like this — neglect to do the bare minimum when it comes to research and subsequent writing. And what ultimately appeared was a shallow visual of Indian culture, likely resulting in a lot of viewers not knowing what a sari is at all. Everything you need to know before watching ‘Peacemaker’