Say what you will about Downton Abbey creator Julian Fellowes, but the guy knows what he likes. His favorite — and perhaps only thematic niche — is the decline of old money aristocracy in the face of social upheaval. That sums up Downton Abbey in a sentence and describes most of his other works of British period fiction as well. However, his new show, The Gilded Age, is an HBO series that takes Fellowes’s niche to a place it’s never been before and dares to ask the question: What if Downton…but America?

In The Gilded Age, blue-blooded old New York families who’ve “been in charge since the Mayflower landed” face modernity in the form of the Russell family, a clan of extravagant millionaires whose new house on Fifth Avenue signifies the encroachment of new money on the territory of the old. No matter how staggering the Russells’ wealth is, it cannot buy them acceptance into polite society. This is where Bertha, the Russell family matriarch played by the inimitable Carrie Coon, comes in. And so do her outfits.

The first episode of The Gilded Age shows how willing Bertha is to signal belonging amongst the millionaires by blatantly out-millionaireing everyone else through a wardrobe that must have sucked up the lion’s share of the show’s costume budget. Bertha has seven — count ’em, seven — costume changes in the first episode alone. Each gown is more remarkable than the last and brilliantly creates a visual distinction between her fresh, modern taste and the dull old-money weirdos, whose respectability depends on how tightly they cling to the disappearing sartorial past.

Bertha’s first Gilded Age outfit is a triumph in costuming that immediately sets her apart from everyone else on the show. Where the other wealthy women in the episode obscure themselves in rich, respectable jewel tones, she arrives eleven minutes into the episode wearing a spectacular baby-blue traveling costume and cape. She further offends the eyes of the old guard by showing up to a charity event in a yellow day dress with an asymmetrical bodice and an entire bird-ass glued to her head. The look is objectively awesome to our modern sensibilities for all the reasons it’s tacky to the old guard. The colors are bright, and the cut is far more daring than any 19th-century New York doyenne would wear. It’s a shame she hasn’t passed on any of her taste to her poor daughter Grace (Taissa Farmiga), who is wearing something that could be described as a wig, but can’t possibly be one. It just can’t. 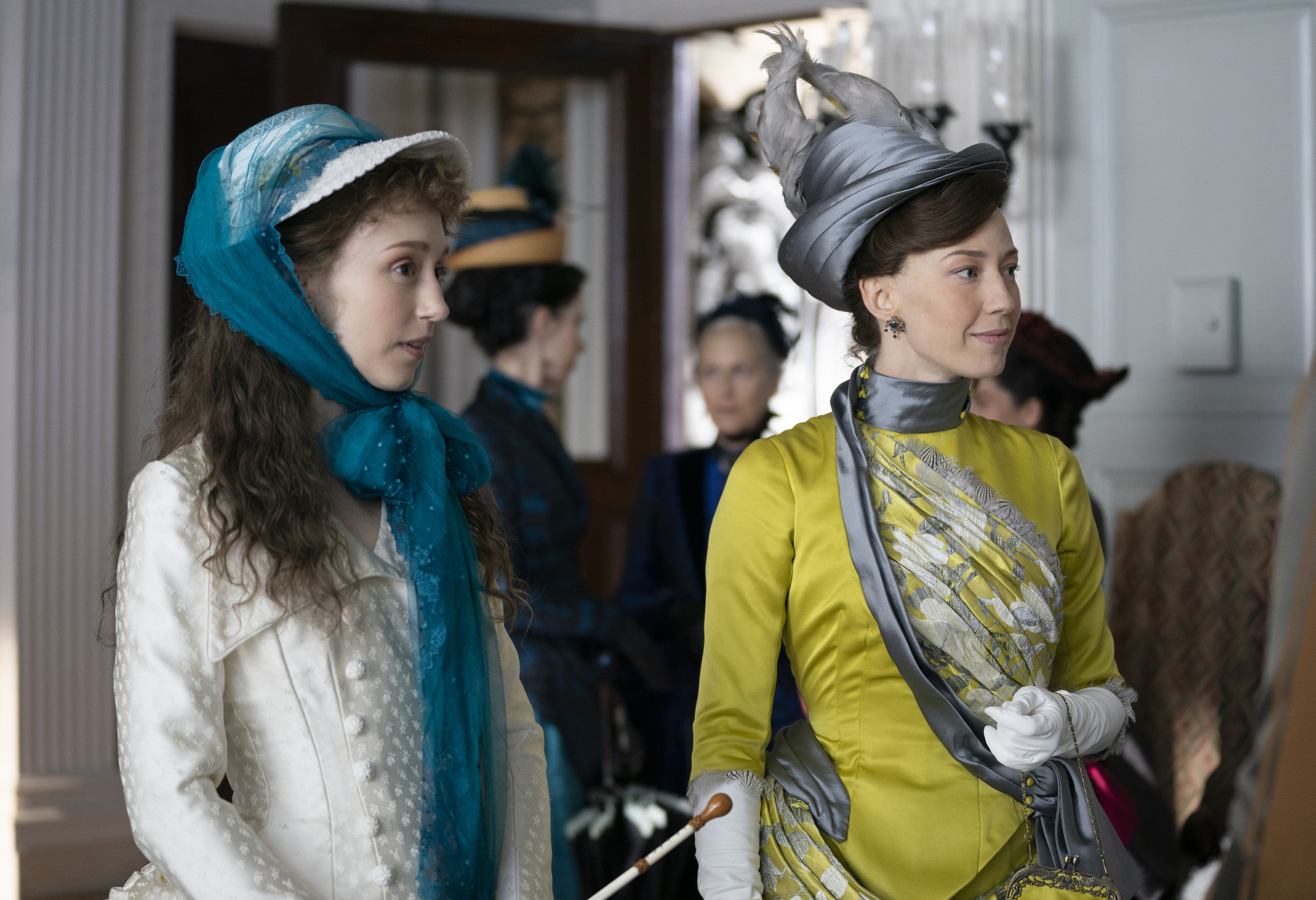 Later that night, Carrie — I mean Bertha — wears this dress to dinner. It’s a good thing she saves this silky boob-feather confection for the privacy of her own home, because the first Mayflower snob who caught a glimpse of this on the street would drop dead on the spot. Fourth on the list is this lavender walking dress (with another matching cape!). Bertha wears it to personally drop off invitations to the 200-person housewarming party that she throws to dazzle her neighbors. The party flops, but this look does not. The final three dresses that prove The Gilded Age knows exactly what to do to make Bertha “Bird Hat” Russell look like the baddest bench in Central Park East are part of a party sequence involving three outfit changes in a single night. Behold: the robe Bertha wears before she even gets dressed for real. There are women today who would wear this to the Met Ball. It’s me. I’m women. Next comes her actual ball outfit, which is more subdued than her previous outfits. Going for black-and-white instead of her favored brights might indicate that Bertha knows classic colors are more acceptable to snobs. Yet she still chooses to taste the rainbow in her everyday wardrobe. Note: Putting “old money” Marian (Luisa Jacobsen) in Beauty-and-the-Beast yellow isn’t a mistake. She’s a force for modernity too! When her party predictably flops, Bertha is humiliated, but that doesn’t stop her from serving a bedtime look worthy of a 19th-century millionaire heroine. She sobs into her pillow and swears revenge on those old-money jerks who rejected her. All the while, she’s wearing the prettiest, daintiest nightgown with layered lace sleeves. There is no doubt in my mind that a woman who wears that to bed is capable of social homicide. The Gilded Age is sure to bring joy to anyone who enjoys a good, soapy period drama. But as far as I’m concerned, the real joy of the show will be counting how many more dresses the costume department can cram onto Carrie Coon’s furious, regal character in one episode. Is seven the baseline? Will next week have eight? Let’s definitely make it a drinking game.

The Gilded Age is streaming on HBO and HBO Max.