PREORDER: A new Pokémon Legends: Arceus-themed Hori Split Pad Pro controller is set for release on Feb. 28. You can reserve one ahead of time at Amazon or Best Buy for $59.99.

Imagine you’re about to finally catch a wild Alpha Rapidash several hours into Pokémon Legends: Arceus when suddenly your hands cramp up. The red-eyed equine spots you before you can sneak away and smacks the absolute crap out of you and your level 5 Rowlet, sending you to the dreaded “Everything went black!” screen.

It’s a tale as old as the Hisui region: The Joy-Cons that come with the Nintendo Switch are incredibly awkward and uncomfortable to hold for long periods of time. In fact, it’s probably people’s biggest complaint about them, after that infamous drift problem.

As far as third-party alternatives go, consider the humble Hori Split Pad Pro. According to our friends over at PCMag (which is owned by Mashable’s publisher, Ziff Davis), it’s “the most comfortable way to play the Nintendo Switch in handheld mode.” It’s also getting an Arceus-themed makeover later this month, which is fun. (As of Feb. 15, you could pre-order it at Amazon and Best Buy for $59.99 — that’s $20 cheaper than a new pair of Joy-Cons, FYI.)

SEE ALSO:
‘Pokémon Legends: Arceus’ is the game every kid imagined Pokémon would be

The Split Pad Pro looks like a traditional gamepad that’s been split down the middle, with full-size analog sticks, a D-pad, assignable rear triggers, and large shoulder buttons for better ergonomics. You don’t get any rumble or motion controls, unfortunately — that’s one advantage to sticking with your Joy-Cons — though PCMag says its improved feel is is “more than worth the tradeoff.”

Featuring a colorful illustration of the game’s title pocket monster, the Pokemon Legends: Arceus edition of the Split Pad Pro is set for release on Feb. 28 alongside a matching hard-shell Vault Case and a padded, travel-friendly Adventure Pack. (They were also up for preorder on Amazon at the time of writing, retailing for $24.99 and $29.99, respectively.)

Oh, you haven’t downloaded Arceus yet? Walmart was selling digital copies for just $53.09 (normally $59.99) the last time we checked, which is its lowest price to date. 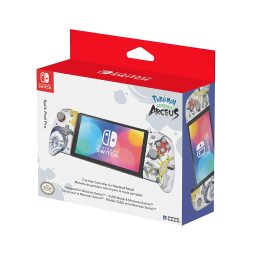 How to Establish a Sexual Identity