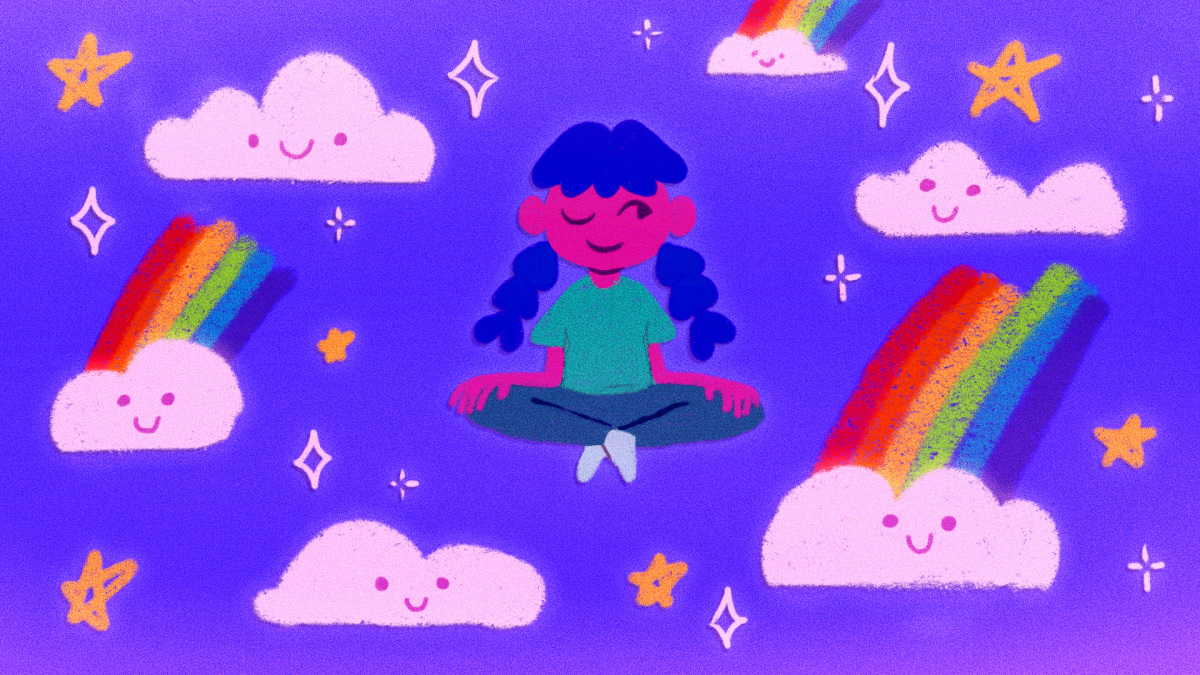 Many years ago, when my daughter was a toddler, I decided to introduce her to the concept of mindfulness, which is most simply defined as the ability to observe thoughts and feelings non-judgmentally, and with compassion and curiosity.

I’d only begun developing this capacity in my 30s and found it increasingly vital as I navigated the chaos of being a new mom, working full-time, and coping with sleep deprivation, all while an impressionable tiny human stood by as my constant witness. Research and anecdotal evidence convinced me of the benefits of mindfulness, including reduced stress, less anxiety, and improved sleep.

When children practice mindfulness, research suggests that it can help them focus and regulate emotions. There are helpful strategies for introducing the concept to them, including setting reasonable expectations, modeling mindful behaviors, structuring it around their interests and goals, and customizing their practice according to their needs.

But I didn’t understand that then. Instead, possessing the urgency of a first-time parent worried about whether their child will thrive in the world, I approached mindfulness like a checklist. When she was 3, I ordered the Mindful Kids card deck, eager to try the activities designed for “kindness, focus, and calm.” When she was 4, we flipped through the picture book Goodnight Yoga on a daily basis. From then until recently, I played Headspace meditations at bedtime.

This might sound sensible, if mildly obnoxious parenting. But I cringe now at the mistakes I made in imposing so many activities.

When my daughter got bored with a Mindful Kids activity, I fretted about how she’d learn the skills I desperately wanted her to adopt. When she declined to do the yoga poses from the book, and wanted to talk about the illustrations instead, I showed her the movements and insisted she try them too. When she fidgeted in bed during a two-minute guided imagery meditation, I stopped the recording until she became still.

Told you: cringeworthy. It’s no wonder that she resisted mindfulness practices until this year. Then, after stumbling across Peace Out, a mindfulness stories podcast for kids, I invited her to listen. My daughter is a voracious reader, and the combination of storytelling and mindfulness was perfect for her. She became hooked thanks to a storyline about a snow leopard and red panda on the hunt for a mysterious treasure. The podcast, and its signature calm down countdown, is now the last thing she listens to before bed.

As my own practice evolved, I was able to recognize where I went wrong. I was so wrapped up in what I thought mindfulness should look like for my child that I missed opportunities to let her take the lead as we explored it together. That, as I learned the hard way, is the key to engaging a child in mindfulness practice and education.

After speaking with mindfulness experts about how to practice with kids, I’ve distilled their advice into three takeaways: set reasonable expectations, play to their strengths, and help them customize their practice. Let my mistakes be a cautionary tale.

1. What to expect when practicing mindfulness with kids

It’s natural for kids to view mindfulness skeptically. The way adults often depict the concept runs counter to children’s instincts and impulses. The kind of stillness, quiet, and calm you might encounter at a meditation center or yoga studio, for example, can seem like a punishment to an energetic kid who didn’t play enough at recess.

It’s critical, however, not to mistake their spiritedness for distractibility. In fact, “kids are way more present and way more mindful than adults at baseline,” says Dr. Heather Bernstein, Psy.D., a clinical psychologist in the Mood Disorders Center at the Child Mind Institute.

Why? Because they’re living in the moment, easily immersed in whatever art project, television show, or imaginary play that’s currently entertaining them. Parents might be irritated by a child’s laser focus on a task they enjoy — at least, when it means they struggle to stop playing and get ready for school. But it does mean they possess the innate ability to train their attention — just not in the way adults typically prefer.

This means you need to calibrate expectations accordingly. Bernstein says that teaching mindfulness isn’t about getting a restless kid to stop moving, but rather to help them cultivate the awareness that they are fidgeting.

For example, a mindful child might say “I’m noticing the urge to get up and dance,” or, perhaps more realistically, “my mind is thinking about the TV show I was watching right before my mom made me do mindfulness.”

“Whatever it might be,” Bernstein adds, “it’s just about paying attention to what’s happening in the present moment.”

A formal meditation habit helps cultivate this awareness — but it’s never required to practice mindfulness, for kids or adults. When mindfulness exercises incorporate the breath, it’s supposed to be an anchor point; something to hold on to when thoughts derail an effort to stay in the present moment.

For children new to these activities, mindful breathing often isn’t easy because it means slowing down and sitting still. (And of course, adults struggle with this, too.)

‘Your own practice – that’s what is inspiring and educating them.’

Tim Hwang, a mindfulness and meditation instructor and occupational therapist at a New York City public school, suggests starting by asking your child to feel the sensations of one solitary breath. Talk about what that felt like. Did it give them relief from anxious thoughts or feelings?

Next up, see if they can take five breaths before becoming lost in thought. Slowly, over as many days as it takes, work your way up to 10 breaths, then progress to a minute, and so on. Any time your kid resists doing more breaths, don’t force them.

Hwang, who is a certified mindfulness meditation teacher, says that parents and caregivers will find much more success if they consistently model mindfulness for their child. When a child is mid-tantrum, for example, it’s unrealistic to instruct them to breathe deeply if you’re not demonstrating what that looks like.

That doesn’t mean you’re a saint who never reacts harshly. Rather, when you’re late to school drop-off and feeling frustrated, you say “I’m feeling stressed out because we haven’t left yet,” as a substitute for shouting commands.

And when you inevitably raise your voice, you could pause afterward, inhale deeply, name how you’re feeling, apologize, and practice self-compassion. “Your own practice – that’s what is inspiring and educating them,” says Hwang.

2. Play to their strengths

Starting with reasonable expectations of yourself and your child makes it easier to play to their strengths.

Bernstein, who teaches mindfulness skills to her pediatric patients, suggests parents integrate the concept into what their children already love. Ask a budding artist to pause and feel the sensation of the crayon on their finger and describe it. At dinnertime, stop for one minute to express gratitude for the food before you.

Let your child’s observations guide their mindfulness practice as well. If a keen stargazer draws your attention to a bright moon, marvel at it together and name the emotions it raises, like awe, calm, or wonder. If your child notices chirping birds on the walk to school, hold the impulse to talk; treat the noise like a sound meditation.

“It’s starting to kind of build around the child’s world to say, we’re being mindful right now by just pausing and paying attention,” says Bernstein. “That’s it — that’s a mindfulness practice in and of itself.”

Chanel Tsang, an educator in Toronto, Canada, created Peace Out, in 2017. She quickly learned that children love fun facts, particularly about topics like animals and space. Each episode weaves together stories that feature factual tidbits, yoga movements, breath work, and mindfulness education.

Tsang says Peace Out has been listened to more than four million times. My daughter has been responsible for a few dozen of them. Tsang’s gentle but vibrant voice prompts her to breathe during a 10-second countdown. Or it narrates an underwater adventure with a whale shark, using the fish’s filter feeding to talk about how to sort thoughts as they arise.

By integrating mindfulness into your child’s daily routine, in a way that reflects their interests, the concept becomes less abstract — and thereby easier to practice regularly. Bringing a child’s attention to how they felt before and after a breathing or mindfulness exercise, Tsang says, helps them notice the calm, peaceful emotions and sensations they can return to in the future.

Children whose involuntary or repetitive movements help them cope with stress can actually use them as the object of their mindful attention. Alternatively, they might be more comfortable with mindful physical expression, such as shaking, dancing or walking.

“Everyone should have their own pattern and practice,” says Hwang. “It should be customized to their individualized needs.”

“Everyone should have their own pattern and practice.”

That’s why it’s critical to follow their cues, experiment with different types of mindfulness and meditation, and recognize that various practices may be useful in different ways. Hwang suggests checking in with a child about how they’re feeling before starting a formal practice, like guided meditation.

If they had a terrible day at school, encouraging them to watch thoughts float away like bubbles rising in the air might be less effective than you think. Instead, perhaps, invite them them to practice self-compassion by holding a hand to their heart and say something kind to themselves.

Adults who worry that their child isn’t capable of mindfulness because of an attention, learning, or mental health challenge should seek guidance from a professional or specialist, says Dr. Bernstein. Adaptations to standard mindfulness practices can make it accessible to all children. “There’s not an exclusionary criteria in terms of who can practice mindfulness,” she says.

Perhaps it’s the evolution of my own mindfulness practice, or just the severing of expectations that came with having a second child. But I have surrendered my attachment to how my daughter explores the concept. She will intuitively gravitate toward what’s most satisfying for her. My role is to mindfully pay attention to what that is, then let her lead the way.

How to watch Season 3 of ‘Yellowstone’