TL;DR: As of May 25, the Deeper Connect Pico Decentralized VPN & Cybersecurity Hardware + WiFi Adapter is on sale for just $248.

You’ve heard of the Deeper Connect Nano, now meet its tinier sibling, the Deeper Connect Pico. Like its bigger brother, the Pico was brought to life after raising millions on both Indiegogo and Kickstarter earlier this year — and now it’s available to the masses. It also incorporates the same plug-and-play setup as the former model, only in a much more portable size.

Deeper Network claims the Pico is the world’s thinnest, lighting, smallest, and yet most powerful cybersecurity hardware device. It integrates an enterprise-grade firewall and, of course, the decentralized VPN (DPN) into its tiny frame — all for less than the Nano.

The one burden of the Deeper Connect Nano was the inconvenience of carrying it around with you. The Pico almost eliminates that burden, with a new design that’s just over 3 inches long and an inch wide. It weighs only 0.11 pounds, so carrying it along on a trip is almost unnoticeable. The downside? You still have to remember to bring it along.

The Pico comes with an included WiFi adapter, so you can enjoy a safe and fast private network anytime and anywhere, whether you’re at home or stuck at the airport during a layover. If you’re near your router, you can also plug the Pico into that with the included cables and use your own internet connection.

Because the Deeper Network offers a decentralized private network (DPN) rather than a VPN, you’ll have more control over your own encrypted data. There are no centralized servers, so it ultimately provides a democratic internet where no organization owns the network on which the device runs.

Reviews have noted the speed and bandwidth aren’t the best in the business. But considering you’ll pay once for this device and get private browsing for life, a few extra seconds of load time isn’t a huge deal.

Ditch the subscription service and enjoy the Deeper Connect Pico for just $248 for life. 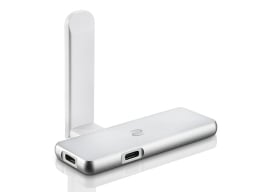