My litter box is an open plastic box underneath the sink in my small Brooklyn bathroom. My cat, Colby Jack, likes to keep a clean house – and by that I mean that if his litter box is dirty, he will pee on your clothes.

So I jumped at the opportunity to try out the Litter-Robot 4 and its promise that I wouldn’t have to follow my cat to the bathroom and promptly clean up his business. The Litter-Robot 4 senses when Colby uses it and then goes through a cleaning cycle, moving the dirty litter into a trash bag and keeping the litter in the box clean. Ideal, I thought, for my neat freak of a cat.

I was also drawn to the optional OdorTrap System, which is supposed to neutralize litter box odors by sealing the waste draw and having a carbon filter or OdorTrap Packs. As someone who lives in a small apartment, the idea that my bathroom won’t be perpetually stinky is a nice one. And it promises that its “enhanced litter-sifting technology” limits dust, and the fence reduces litter tracking. A delightful idea, considering I vacuum every day due to Colby’s incessant litter tracking.

The Litter-Robot 4 also tracks the litter and waste drawer levels, recognizes cats that weigh more than three pounds, and lets you monitor your cats activity and weight, all of which you can access from the app. I was, admittedly, less interested in having this information about my cat, who I think would be truly disturbed to discover how deeply I have begun collecting data on him. But I do love a good graph, so I gave the $649 litter box a try.

Bringing the Litter-Robot 4 to life was a feat all on its own, and one I celebrated with verve. That celebration was possible only, of course, because I didn’t have to put anything together at the end of it. The Litter-Robot 4 comes completely put together; all you have to do is plug it in. What was lost by having to carry this giant piece of machinery up five flights of stairs and through my apartment — and then disassembling the cardboard box and taking it back downstairs after unpacking it — is made up for entirely by the ease of assembling the litter box. It requires just about no work whatsoever: You just plug it in, and turn it on. And there it is: a litter box that looks like a space pod from 2001: A Space Odyssey, or a tiny little dryer, working within minutes. 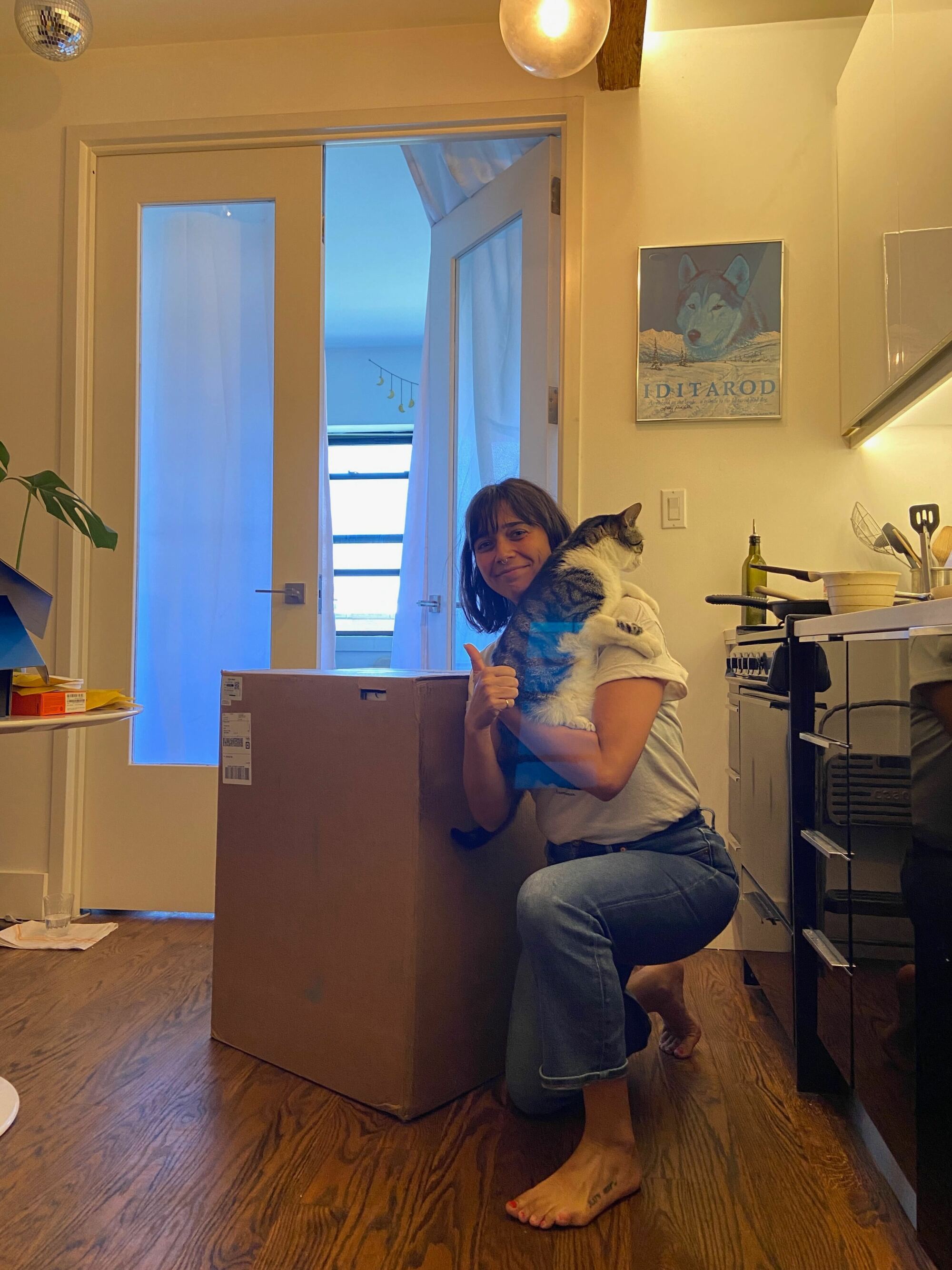 Colby Jack and me, excited to see his new bathroom
Credit: Christianna Silva

While you may think the directions for a system like this would make it difficult to connect the proprietary phone app to the device, that’s not true, either. It’s about three steps that took me less than 5 minutes to complete. And then it just… works. All at once.

The biggest problem with the unboxing, for me, was space. I couldn’t close the door when I went into my bathroom, where Colby’s litter box is typically located. Since I have a roommate, and we each delight in the small bit of private space we have in this apartment, I had to find a new spot for the machine — which could only be the living room. Space is a big issue overall with the Litter-Robot 4, especially considering it’s a big, gaping, open hole that pulls all eyes into the room towards it. It would, however, look very nice in a laundry room.

Getting your cat familiar

Colby Jack is a very brave cat, but he is still very small and very dumb. During the process of getting him familiar with this absolute dump truck of a litter box, he showed his disapproval by peeing on a backpack and a denim jacket that I left on the floor. I prevailed despite it all and, within about a week, he was using it regularly. But it’s been almost two weeks since I set up the litter box, and he still glares at it when it cleans, and he screams at me or my roommate when he needs to use it. I don’t think Colby will ever be friends with the Litter-Robot 4, but I believe they can learn to work together. 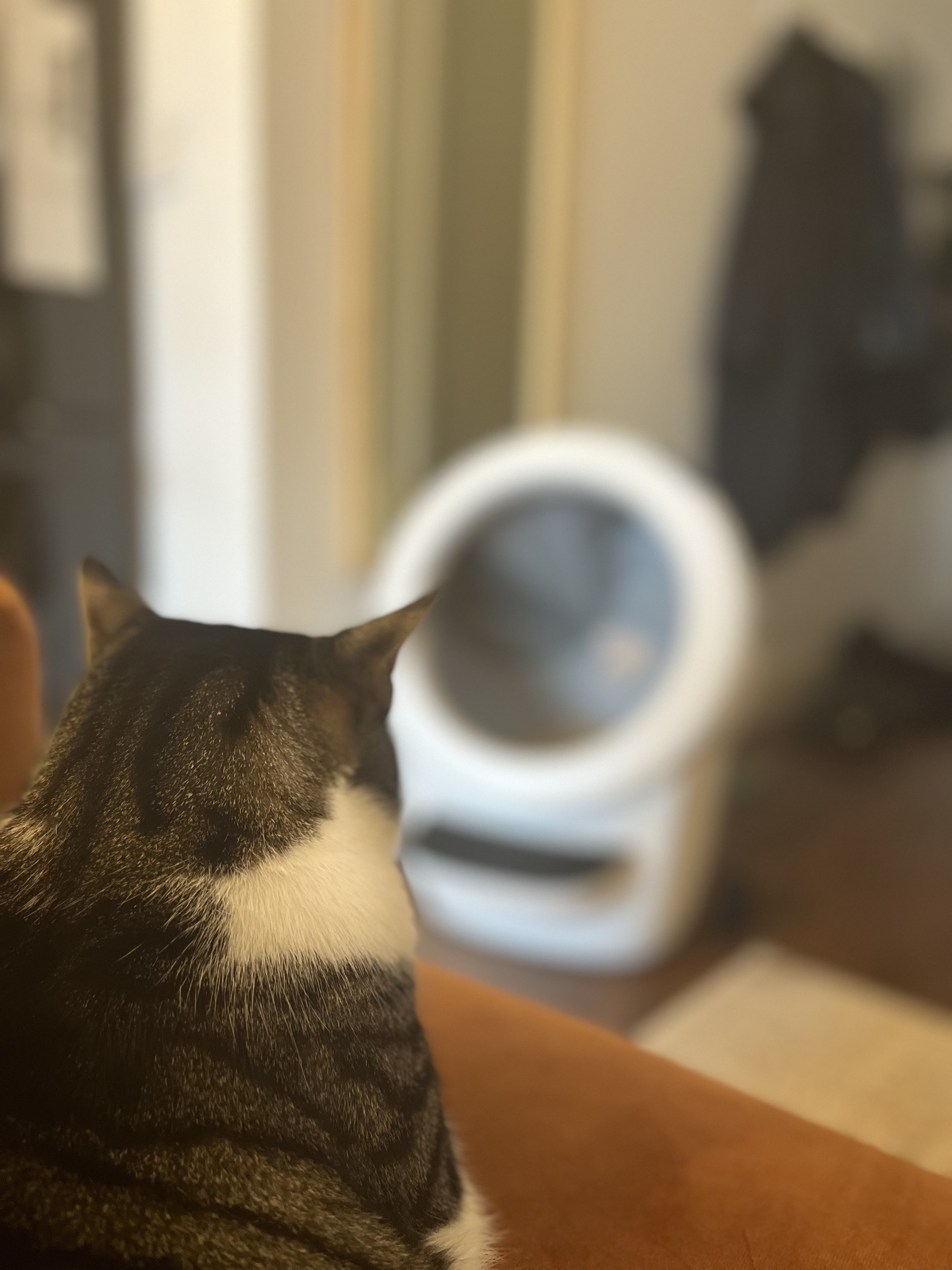 What makes this litter box special?

There are other litter boxes that clean themselves automatically, but what sets the litter robot apart is the wifi- and bluetooth-enabled app that tracks your cat’s bathroom output and weight, and sends you a notification when the litter box has been cleaned. I do not care for this, just because I don’t particularly want to be alerted when I’m not at home that my cat is using the toilet. One morning, I wasn’t at home and was alerted over a dozen times because my cat, being the little freak he is, was stepping in and out of the litter box incessantly. 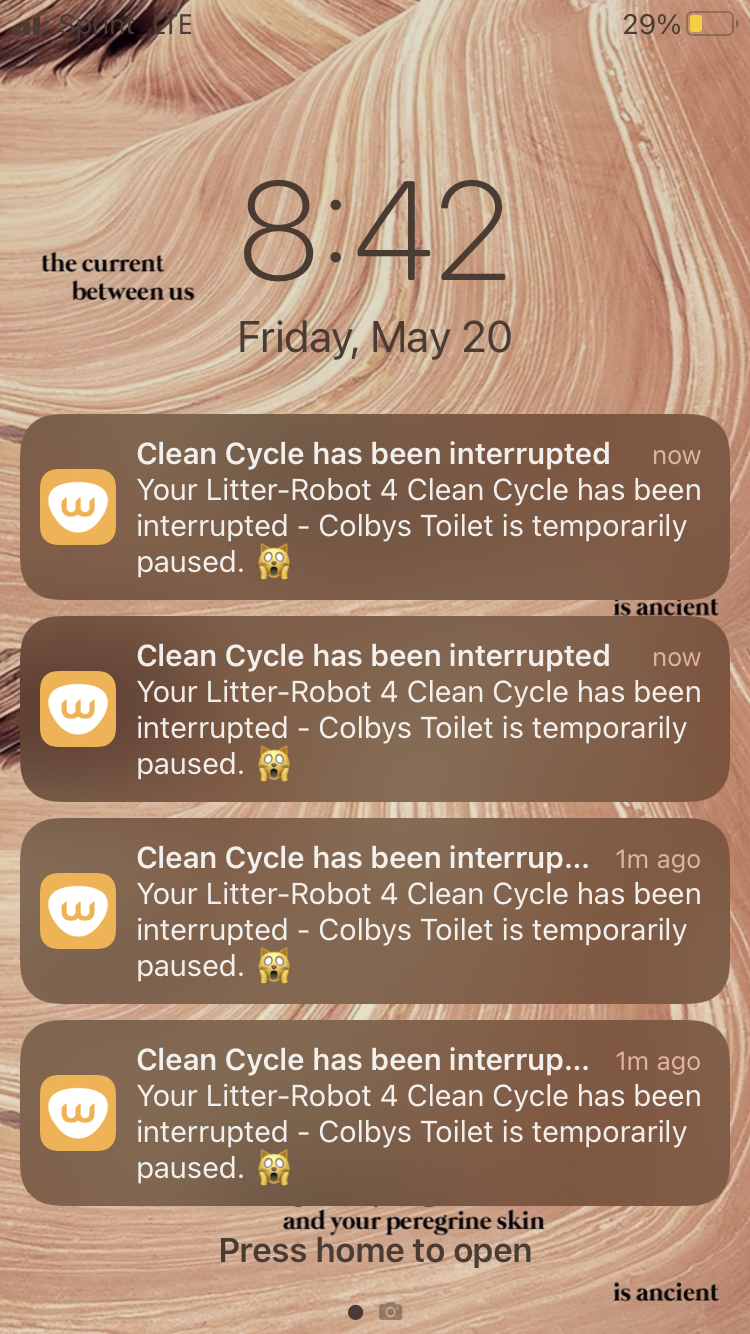 u up?
Credit: Christianna Silva

I’m not sure why you’d want notifications about your cat’s bowel movements, but I’ve brainstormed a few reasons: your cat is sick and you want to track how often their using the restroom; you are a person who loves tech and the data is genuinely interesting to you; you are attending a dinner party and were given explicit instructions that you can’t speak about anything normal.

Is it worth the high price?

The litter robot comes through with its promises: It’s quiet, it automatically cleans your cat’s litter, sends notifications to you with tons of information about your cat, and keeps the smell at bay.

But this machine also takes up a significant amount of real estate, and is sort of a gaping hole of cat litter staring directly at you — not a particularly pretty conversation piece to keep in your home. And my cat screams at me before he uses it, which I haven’t been unable to unpack, emotionally.

Ultimately, its massive size and inability to keep litter at bay means it’s not worth the price for me. I could see this being an amazing tool for someone busy who has a big house and space for this little monster. For Colby and me, though, we’ll stick with our little plastic box.

Payment apps collect and share your data. Here’s how to lock them down.